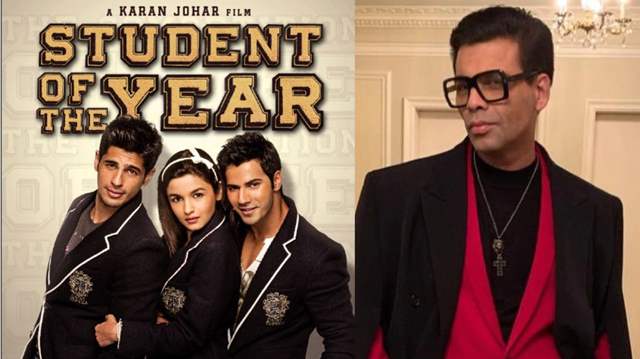 It is kind of difficult to fathom the fact that it has already been 10 years to one of Karan Johar's brave projects as he launched 3 stunners to the industry with this blockbuster film. Student Of The Year marked the debut of Varun Dhawan, Alia Bhatt and Sidharth Malhotra in B-town and since then there is no looking back for these impeccable actors.

Today, as the film marks 10 years, filmmaker Karan Johar who feels very strongly for this project took to his social media handle and shared a video, taking his followers down the memory lane and talking about what makes 'SOTY' his lovely baby.

In the video, we can see montage of clips from the film and the characters being introduced with remarkable dialogues. Karan can also be seen saying "Student Of The Year to me is a celebration of everything I love about cinema. The youth, zest, zing, energy, comic timing and every thing that I've always loved about Hindi cinema is a part of this film."

Sharing this video, Karan also penned a heart warming note that read, "SOTY started of as me making a “holiday film”…. A film that certainly wasn’t intended to move any cinematic mountains but a film that was young , fun and entertaining … what I didn’t realise then that this film would give me so much more than memories or a commercial success … would give so much more than a film in my directorial archives… this film gave me three of my most defining relationships … Sid, Varun and Alia went on to become my family…..besides my mom they are the three people I think I talk to every single day…. I never knew way back then that I would have children of my own …but my first protective parental feeling was for all three of them… I love you SID! I love you VARUN and I love you ALIA( yes yes I know I am not supposed to keep saying it but what the heck love is love )… I say it to my kids and I want to say it to all 3 of you ….. love you to the moon and back ….@sidmalhotra @aliaabhatt @varundvn @apoorva1972 @dharmamovies #10YearsOfSOTY".

For the unversed, the film also starred Rishi Kapoor, Ronit Roy, Sana Saeed, Ram Kapoor and others in prominent roles.

+ 7
3 months ago Good for Kjo and the students.. idk why it is being celebrated caz back in the day it was Trolled and was considered a bad film..