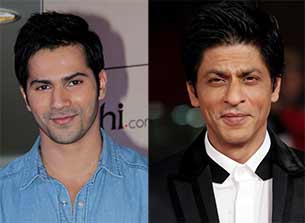 Varun Dhawan, who went all out for the publicity of his latest release "Main Tera Hero", says superstar Shah Rukh Khan is his role model when it comes to film marketing.

"My role model for marketing films is Shah Rukh Khan. He is unbelievable. Look at how he marketed 'Chennai Express', said Varun.

In "Main Tera Hero", Bollywood's other beloved Khan, Salman, has lent his voice. Isn't he a role model for Varun?

"He is a role model for not just me but every young actor. More than anything else he's a tremendous human being. He just called up Dad and said, 'I want to do something for Varun.' Dad gave him the voice of god. We didn't want Salman to help market the film," said the young actor.

"Main Tera Hero" is directed by Varun's father David Dhawan. The latter had a health scare during the film's shoot in Bangkok and Varun says he is not happy with the fact that his father has not been taking care of his health.

"I've actually inherited my energy level from him. But he's not physically fit enough to carry off the energy. I tell him to get fitter. I take him to the gym with me. But not frequently enough.

"To add to his weight woes, he is a foodie. But he has cut down on his food. The only reason I am talking about it is because I'm desperate for him to get fitter. Lots of his friends tell him to change his lifestyle. I feel if he reads what his son is saying, he will take care of his health," he added.

Varun is also close to his brother Rohit. Any plans of working with him?

"I definitely want to work with him. When the time is right, we will. But nothing planned right now," he said.