View Profile
When it comes to hosting an event, SRK does it at his best. Cracking one-liners, wholesome interaction with the 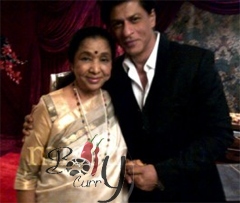 audience, shaking a leg, you name it and SRK is ready with it, charming and entralling the spectators. However, when SRK recently co-hosted the Zee Cine Awards with Priyanka Chopra, one particular act on his part didn't go down too well with a certain someone.
It's the singing diva, Asha Bhosle were talking about. A birdie informs us that when veteran singer was on stage to accept her award, she was requested to sing. And while she obliged, she spotted SRK leaving his seat and walking out. Oops!
Later, Bhosle caught hold of SRK backstage and queried whether he didn't like her song, almost scolded him in the process! But being the charmer that he is, SRK apologised immediately and explained his causes.
Exercise caution when your seniors are on stage, is all we'll say to SRK!