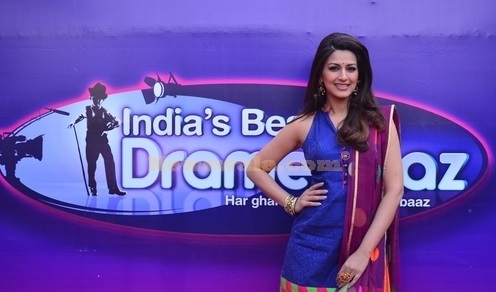 One of the most loved actresses from Bolywood, Sonali Bendre will now judge the second season of Zee TV's popular show 'India's Best Draamebaaz'. The actress has marked her presence on the small screen as a judge for the fourth season of 'Indian Idol' & 'India's Got Talent'. Sonali was last seen on the show 'Ajeeb Dastan Hai Ye' and will now be returning to television again as a host.

According to a report, the actress has confirmed to judge the second season of the show, as she feels that the show is close to her heart and its fun because of the kids. The actress had actually decided to not take up any projects after 'Ajeeb Dastaan Hai Ye' as it required a hectic shooting schedule. But she accepted to judge IBD only for the participating kids' innocence and purity.

Sharing about her experience with after 'Ajeeb Dastaan Hai Ye', the actress informed that, shooting till six months was fine but then she couldn't take it further. She wants to spent time with her son Ranveer and family. The reality show 'India's Best Draamebaaz' perfectly fits the bill, as far as her time space is concerned, and thus she accepted to do the show.

'India's Best Draamebaaz' showcases junior talents from across the country with acting, singing and similar skills.