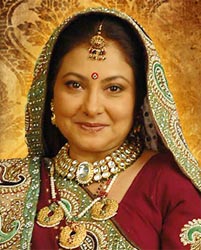 Smita Jaykar portrays the role of Chandraprabha in Zee and Rajshri Productions' Yahan Main Ghar Ghar Kheli. While we know that she has carved a niche for herself when it comes to acting, her storytelling skills are something not everyone is aware of.

Smita tells us, "My storytelling skills are just an extension of my love for teaching. If I wouldn't have been an actor I would have definitely turned out to be a teacher. I love explaining stuff to others and touchwood, most of the times they get me (laughs)."

She explains why in spite of doing well in Bollywood (her recent film Ajab Prem Ki Ghajab Kahani is a hit) she took up a daily soap. Smita explains, "Rajshri is not just any production house. And Soorajji (Sooraj Barjatya) is such a sweet person that if he offers you a role, you just can't say no to him. I confess after signing on the dotted papers, I was having the jitters about how I will handle the hectic schedule of a daily soap. But now that I've started working I'm absolutely happy with my decision."

Smita is all praises for Rajshri Productions. "Rajshri Productions is one production house which is a class apart from the rest. You know they are disciplined people and will not take your time for granted. They respect and value the people who work with them," she says.

Talking about her character the actress tells us, "I play Chandraprabha who is the Thakurani of the Swarn Bhavan. She has realized that the ancestral property of the Thakurs is depleting and her husband is choosing to ignore it instead of accepting the bitter truth and take an action. As a mother, she tries to teach her daughter, to try to adjust to the new crisis the family is facing, by cutting down on lavish expenses."

Well, we guess Smita's character is offering her ample chances to indulge in her passion of teaching!

+ 2
13 years ago I loved her in APKGK. She is awesome in it, she has done a funny scene really well.