View Profile
After keeping himself away from the craze that followed the 'six-pack-abs' trend, a trend that started from Shahrukh Khan in Om Shanti Om to Aamir 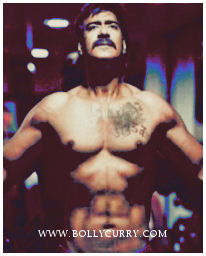 in his blockbuster Ghajini, it's now Ajay Devgn's turn to show his toned muscle power in his next with Rohit Shetty.
Ajay is one such actor who relies much on his acting skills rather than particular looks to carve a niche for himself in Bollywood industry. But for good friend Rohit Shetty's Singham - a Hindi remake of a Tamil film of the same name - Devgn allowed personal physique to play a more important role.
The 42 year old actor, is now vigorously pumping it away at a gym to get those much sought after rippling muscles, which of course is the requirement of his character. Devgn plays a cop settled in a village of Maharashtra.
As revealed by sources, Ajay hit the gym with pure sincerity and passionately practised for three months under the renowned and hardworking trainer, Prashant Sawant.
Opposite him, Singham has debutant Kajal Aggarwal essaying the female lead. The film is slated to hit the theatres on July 22, this year.
All those waiting to see Devgn in his new jaw-dropping physique, say aye.