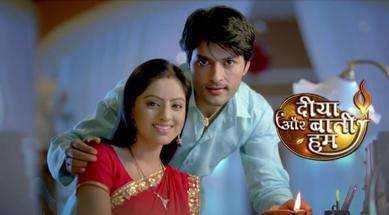 It was really a scary moment on the sets of Shashi Sumeet Mittal's popular show Diya Aur Baati Hum when the air conditioner exploded causing fire on the sets leaving two technicians injured. However, as we say that 'The show must go on' the entire team of Diya Aur Baati Hum have resumed back to their shoot from today.

We hear from our source that, "The incident happened during the Iftaari break on the sets where around 110 people were gathered. The AC wasn't working well from quite a few days. So, gas had to be filled in the compressor of the AC but suddenly AC exploded and the blast took place. The two technicians who were working there were badly injured. One of them got head injury while the other got badly burnt with his leg fractured. The team is back to their shoot from today and as the make up room areas are blocked because of the dust and damage, vanity vans have been called on the sets for the actors."

Pooja Singh aka Emily who was present there on the sets, told us, "We all had gathered in the main hall for the Iftaari break and then we heard a sound of the blast. Suddenly our 2nd unit director Aakashji came running to us asking to run away from here. Then, we all ran away from there and then came to know that the AC has burst and the fire engulfed nearby our make-up rooms. It was very bad and scary. There were few people nearby to our make room and our things were kept in our make-up rooms. Anas dared to go to our make-up rooms to get our things out from there.

Later, even Neil Bhatt dared to go inside along with him. It was a really a major accident which took place yesterday. We had to go our respective places in our shoot costumes and look only leaving everything in our makeup rooms. Even my mobile was inside my make up room. Anas along with few crew members of our team dared to go towards my make up room where it was completely dark. While it took some time for the Ambulance to reach to our sets but till then, Anas took out his car and rushed the injured technicians towards the hospital. I felt like crying seeing those injured people. They were burnt badly. Along with the crew members, it was Anas who dared to do such things among the actors. He really showed great courage to go towards the place where the fire broke out. It was really a horrible experience of my life."

We also spoke to Anas to hear from him about this entire incident. He told us, "There was a lot of chaos on the sets because it was something unexpected which happened. It became dark suddenly on the sets. It happened at the back side of our sets where our make-up rooms are located. Many people gathered on our sets because of our Iftaar break. There was a lot of chaos on the sets because of this and in this kind of a situation, if one person actually gets injured then few others get injured just because of the chaos. I feel my mind runs faster during these kind of situation. I ran towards the make-up rooms. Luckily, I had just parked my car to some other place from where the fire took place. I was in my costume of Suraj and I had my car keys with me only. So, I immediately took out my car to take them towards the hospital. I am thankful to God that nothing major happened with anyone where anything could have happened. We have resumed to our shoots from today onwards."

We hope everything will be fine soon and we wish the injured technicians a speedy recovery!

Ranjeeta_ 6 years ago Anas Rashid, hope that all are going well with all your team, Neil and you did a great job :)

yining 6 years ago I feel sorry for the two technicians. Hope them get well soon.

Anas and Neil, very brave, but still, it's very dangerous to go back into the site, so, please take good care of yourselves. Pray for the safety of all the crew member.

machinegun 6 years ago well done anas and neil. You both are really brave. Oh god plz cure the injured persons as soon as possible

ranil. 6 years ago
All the best Anas Rashid
You are a great person.
God Bless you..

RajeshriS 6 years ago All the best Anas Rashid
You are a great person.
God Bless you..