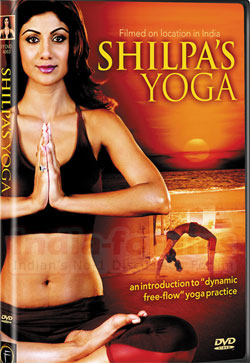 “Everyone wants to maintain a slim waist without dieting and Shilpa's yoga secrets seem to be helping achieve that. No doubt the DVD is selling like cakes," says her publicist Dale Bhagwagar.

In 'Shilpa's Yoga', the actress reveals her fitness secrets to create a lean and toned body while retaining all the feminine curves. Outlining the various benefits of yoga, the DVD demonstrates specific sequences to enhance concentration, agility and flexibility.

"It showcases the right techniques of doing ‘ashtanga’ yoga. including breathing techniques. Shilpa has been a regular practitioner of yoga from four years, but took special added intensive training from yoga trainers Shiv Kumar Mishra and Vinayak Dixit for some time, making sure she perfected the ‘asans’ before demonstrating them to the world," adds Bhagwagar.

Shot at the backwaters in Kerala, 'Shilpa's Yoga' is directed by Manish Jha (of the critically-acclaimed feature films 'Matrabhoomi' and 'Anwar' fame). While Arghya Lahiri has written the script, the camerawork is handled by Englishman Jamie Sowlds.

To go with the mood and feel, the package also contains a free lounge music CD with compositions by Pankaj Awasthi. This is to help unwind and relax after practicing the yoga techniques.