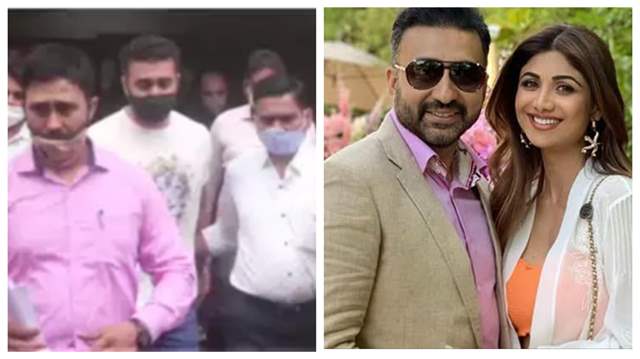 The saga surrounding Raj Kundra's arrest continues to get murkier for the businessman and now, things have only gotten worse for him.

After being in news for not co-operating with the police, his custody was apparently extended and now, his Juhu residence where he resides with wife and actor Shilpa Shetty has also been raided by the Mumbai police crime branch.

According to ANI, a team from the Crime Branch has reached Shilpa Shetty and Raj Kundra’s Juhu bungalow in a case related to the production of pornographic films.

In court today, the Mumbai Police stated that they suspect Raj Kundra indulged in online betting and used the money that he earned from pornography, which is why they wanted to investigate transactions between Raj Kundra's two bank accounts. Quoting the Mumbai Police, ANI further reported, “In the WhatsApp chats, we have found that Raj Kundra was talking about a deal about selling 121 videos for USD 1.2 million. This deal seems to be on the international level.”

After Raj Kundra’s custody was extended, his lawyer, advocate Subhash Jadhav stated they will move High Court challenging his arrest in the case. He told ETimes, “Raj Kundra’s arrest is illegal. There is not a single video which can be called pornographic. A 4000 page charge sheet has been filed but the police was not even able to point out any sexually explicit act in the video which demonstrated illegality under section 67a. Rest of the section applied are bailable. The Supreme Court had earlier released Munawar Farooqui on the same grounds.”