Starting next week NDTV Imagine's mythological classic Mahima Shani Dev Ki will now narrate a new chapter and will air once in a week for one hour.

The show will dwell on the legend and significance of the famous shrine of Lord Shani at Shingnapur and will take viewers through the miracles associated with the temple and the inhabitants of the village. This interesting saga unfolds on Mahima Shani Dev Ki every Saturday at 8pm only on Imagine.

From dispelling the negative myth around Lord Shani through the trials 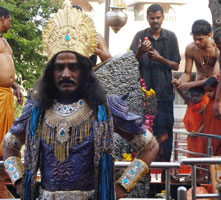 Featured Video
and tribulations faced by King Vikramaditya, to the story of Shani's birth and his parents, the story now moves into Shani's miracles on earth. It is believed that Shani Dev came down to earth in human form during Kalyug, as all Gods, in a mission to establish justice and righteousness in Mrityulok where matters had deteriorated for mankind. Shani decided to come down to earth and reside in Shingnapur in Maharashtra. Thus the story and history of Shingnapur in the Ahmednagar district of Maharashtra became a vital part of the life story of Shani.

At this juncture, Shailja Kejriwal, EVP- Content, NDTV Imagine said, "Mahima Shani Dev Ki re-defined story telling with its collection of interesting tales that breaks the myth behind Shani Dev and will now highlight the miracles of the deity and the significance of Shani Shinganapur."

Highlighting the thought behind the series' extension, Shiv Sagar, Creative Director, Sagar Arts, said, "Till now we have shown Shani Dev's childhood, the agony he went through and the exceptional powers he was blessed with. Going forward it is the contemporary story of the divine presence of Shani and the life changing miracles which would be brought on screen. When I first visited the Shani Shinganapur temple, its grandeur, its stature and its enigma, made me feel its power and that is one of the key reasons why we decided to make a show on Shani Dev. We have cleared the misconceptions about Shaani and tried to portray him in the right perspective and will continue to do so more effectively through this chapter."

Daya Shankar Pandey, who plays Lord Shani, said, "I have been told that Shani Dev is very favorably placed in my chart and I am sure this role in the serial is a gift he has bestowed on me. In my opinion, Shani Dev is a teacher, disciplining the mighty and the weak to be humble and honest. It was a life-altering role for me to play the role of the deity himself and gives me great please to be a part of this epic. "

Watch this and many more mystifying mahima's of Shani Dev as Sagar Arts takes Mahima Shani Dev Ki to an eventful turn now every Saturday at 8pm only on Imagine.

12 years ago Woww...I''ve been here...But they dont let women/girls enter the temple...only men are allowed ( when we went atleast)