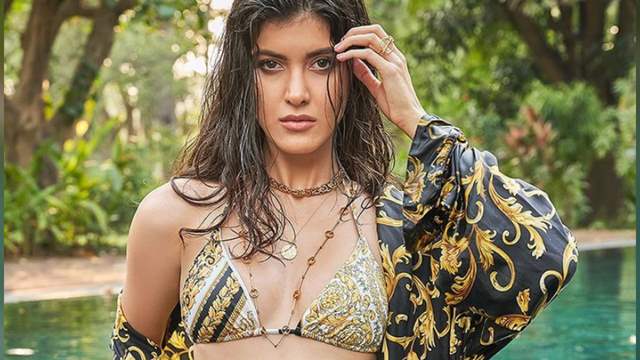 Bollywood actors Sanjay Kapoor and Maheep Kapoor's daughter Shanaya Kapoor is now a part of the movie business. The young beauty received a grand launch by none other than Karan Johar of Dharma Productions.

KJo shared an exciting launch video introducing Shanaya Kapoor as the latest addition to the DCA Squad, i.e the Dharma Cornerstone Agency. She will making her big Bollywood debut in July this year.

While this news has already sparked a lot of excitement, here are some deets about her very first film. We hear that Shanaya will be romancing two handsome actors in her debut film.

As Bollywood Hungama reports, Shanaya has signed her first film with Dharma Cornerstone Agency and will be romancing the other two DCA talents Gurfateh Pirzada and Lakshya Lalwani in the film.

The report adds that the rom-com is very much an urbane triangle love story and it goes on floors around mid-2021.

Earlier, many reports made the rounds that Shanaya Kapoor will make her debut with Student of the year 3.

The portal quoted a source as saying,

Shanaya was indeed being considered along with Alaya F for SOTY 3. But Maheep and KJo discussed it and they didn't want her first film to not have a theatrical release. As for now, it's not known if Shanaya will still do SOTY 3 but that definitely won't be her big debut. The rom com with Lakshya and Gurfateh will be a theatrical release and will introduce her into the movies.

SOTY 3 is being planned as a direct to digital film for Netflix. However, more details are yet to known.

Speaking of the two handsome hunks, Gurfateh Singh Pirzada was last seen in Kiara Advani-starrer Netflix film Guilty. On the other hand, Lakshya Lawani will be making his Bollywood debut with Karan Johar’s Dostana 2 alongside Janhvi Kapoor and Kartik Aaryan.