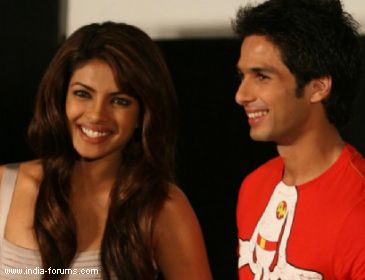 Shahid Kapoor and Priyanka Chopra will be next seen together in Kunal Kohli's "Teri Meri Kahaani" and the filmmaker says that their onscreen chemistry will be far better than it was in "Kaminey".

"In 'Kaminey', the characters Sweety and Guddu were good friends and they were together for only eight scenes. However, the chemistry of Priyanka and Shahid in my film is much more than that. They will be sizzling and will be seen together in 78 scenes," Kohli said in a statement.

"Kaminey", one of the big hits of 2009, revolved around gangsters, politicians and cops. This was Shahid and Priyanka's first film together and people gave thumbs up to their on-screen chemistry.

Denying the reports that the film is a love story, Kohli said: "My film is not a love story. It's the story of three different lives and proves that love is a promise forever. We have chosen one hundred years to talk about love. We didn't want it to be soppy or melodramatic.

"Love, according to me, makes you smile. Since I grew up watching films by Yash Chopra, who is my idol, I wanted my hero and heroine holding hands, looking back and singing in the rain. The film is about soulmates who live forever," he said.