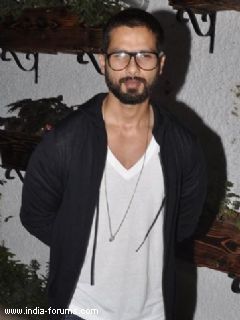 Shahid's performance in Haider has been received well from all quarters.

He has pushed the envelope as an actor for the film and his effort has been noticed and appreciated. The trailer garnered tremendous traction and was actively discussed in circles.

Social networking sites were a buzz after the trailer launched.  Shahid was also inundated with calls from industry and friends.

The film had a good vibe since it went on floors. The first look was very promising and audiences were looking forward to the trailer. And yet the trailer managed to surpass all expectations and delivered a notch higher. The actor is now being quizzed on the process he underwent to get into the skin of his character.

While he was in a meeting at a 5 star suburban hotel a hotel guest apologized for interrupting but he had said he had to share how he loved the trailer of Haider.

Even when Shahid was in the lift in his building - twice residents from the building broached the topic and were raving about the trailer and also mentioned how they are looking forward to the film. Shahid is elated and humbled with all the positive reactions.

His last outing at the box office was R... Rajkumar, which was an out and out masala film. Haider is exactly on the other side of the spectrum.

Pankaj Kapoor was quoted saying, Haider is real, touching and explosive. I have not seen Shakespeare's Hamlet interpreted the way Vishal has in Haider. I am proud of Shahid's performance in Haider.

He has undergone a sea change and he is glad people are accepting and appreciating it.