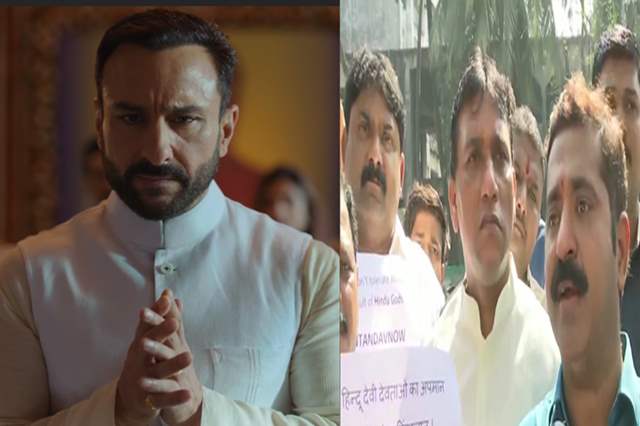 While it was expected that Tandav might not rile up too many political controversies given how the show is based in an entirely fictional word with little-to-no resemblance of the real world but that has happened indeed. The Amazon Prime Video series is indeed in some serious trouble where a latest development states that security outside leading man Saif Ali Khan's home has beefed up. Earlier today, the paparazzi snapped a police van outside the main gate of Ali Khan's old home where the actor and currently pregnant wife-actor Kareena Kapoor Khan are in the process of shifting to a new home which is just down the street.

Meanwhile, Maharashtra BJP MLA Ram Kadam on Sunday filed a police complaint against the creators, actors and director of Tandav for allegedly "insulting Hindu gods and goddesses". The news was confirmed by ANI as Kadam, while speaking to the news wire agency, demanded strict action against the show's creators. BJP's Ram Kadam filed the complaint at Ghatkopar police station in Mumbai for allegedly insulting Hindu Gods. He said, "Strict against should be taken against the actor, director and producer of the web series." Meanwhile, BJP MP Manoj Kotak wrote to Union Minister for Information and Broadcasting Prakash Javadekar, requesting him to ban Tandav.

Justifying the ban, Kotak said, "It seems that makers of Tandav have deliberately mocked Hindu Gods & disrespected Hindu religious sentiments." In his letter to Javdekar, Kotal also wrote that shows on OTT are "full of sex, violence, drugs, abuse and hate (and) sometimes also hurt sentiments of Hindus."-

Apart from this, the show has also been a part of unfortunate trends on Twitter like 'Ban Tandav Now' and 'Boycott Bollywood' among others.

+ 5
1 months ago Aa gaye bharat ke censorboard. So called nationalists. We dnt like it so we wont let it air. Time again movies and tv are treated like news casts. Freedom of speech is literally trampled upon. These peoppe freaking over portrayl of india need a relity check..its to make people think about what they actually idolize. Whays really important. Religion is a man created facade. Its good to believe but thats al it should be there for. Something to look to for support not a bindin fact. Fact is human to human interaction. Your religion also says care for the poor and feed the hungry and other noble things but its not like homeless and poverty stricken homes in india are amy less. These politicians and people seeking outrage only care to make mountains out of molehills. Go and actually fix problems in the country and stop expecting films to do it for you. As for bannin this, so long as amazon is behind it, i pray it never gets banned.