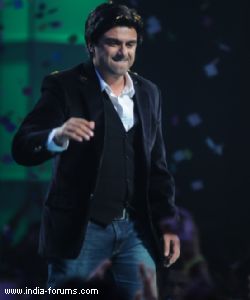 Bigg Boss, masala and twists, all three go hand in hand and this time too, the show brings up the next development after the dramatic exit of Dolly Bindra  and Sameer Soni.

Sameer, in his interview with Tellybuzz, expressed that he wished to re-enter the house if at all Bigg Boss takes back the decision of his exit. Should we say his wish has been fulfilled or justice has been set, from the point of view of the audience? In either way, the big news is that Sameer Soni enters the Bigg Boss house again next week.

Sameer was upset and disturbed with the recent incidents in the house, and had the view that Bigg Boss was not wise in taking the decision of his elimination. But from this twist, it is obvious that Bigg Boss has heard him clear and has made a wise decision for him.

Sameer also said that he felt cheated and abandoned when everyone accused him as the instigator of the fight that broke between Dolly Bindra, Shweta Tiwari, The Great Khali and himself and also felt that whatever that was happening in the house was a test of his character.

After all that had happened, will Sameer have the same attitude towards everyone and will he pass the test of his character this time too and will end up winning the show? That is something to watch out for.

The episode wherein Sameer Soni will enter will be shown on Monday in Bigg Boss 4.

leavesandwaves 9 years ago Only Sameer is decent. All the others are opportunistic and fake. I dont want Sameer to enter into that house where there are only characterless people. Sarah tops the list followed by Veena and Khali. Sarah is a shame to women and Ali is not in love with Sarah just like Sarah is not in love with Ali. They are together to make news and get attention.

lotus075 9 years ago This is good decision as sameer is back. I am happy to see him back.

pyar-ishk 9 years ago Well is good the fans spoke against sameer being evicted and got him back.

tv4me 9 years ago Sameer is truly a gentleman! he did not deserve to be evicted i am soooooo happy he is back :) I thought bigg boss was unfair when he made him leave the house but now i am happy....yaaaaaaaaaaay!!!

suv4u 9 years ago Good...Sam shud b back. Now Dolly is not thr...hope to c the play jodi Ass..mit and Veena out of big boss.he he he

sidlover4lyf 9 years ago YES HES BACK! NOW DIS IS GUD NEWS COZ BIGG BOSS DID INJUSTICE WITH HIM! sameer u rock and yh u should win