It's been reported that Salman Khan will not be calling his friends on Sony's 10 Ka Dum. Well, there are two theories to it, as some say it is because of the less price money offered, while few others say its Salman's wish as he does not want to. 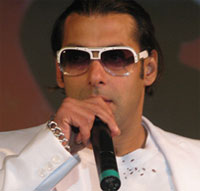 Featured Video
We asked the macho man himself about the exact reason. "There are basically very few friends of mine in the industry now. I would try and call them if possible", he grins.

What if Sony calls SRK on the show? Will you be comfortable with it? "Why not, I would welcome him on the show. It would be his luck to be on my show", he laughs.

"Aamir Khan is also greeted on the show. But this time it's the responsibility of Sony to call the celebrities and I have no problem with whomsoever I share the screen with", he chirps.

When asked about Karisma and Kareena coming as first celebrity guests on the show, Salman replied, "Yes even I have heard that Lolo and Bebo are coming on the show, but have no idea. You better ask the channel", he concludes.

Well, let's wait and watch to see how the celebrities go about in proving their 'Dum' in Salman's show..

+ 2
13 years ago it is better salman leaves himself out of it and let the channel decide which celebrities to invite....but i wud definitely love to see srk on the show.

pimm 13 years ago Mister.K.
how about the following?
1. Vivek Oberoi alone
2. Amitabh and Rekha together
3. Aamir, SRK and Saif together
4. Sridevi and Madhuri together
5. Aishwarya and Kareena together

13 years ago SALMAN NEEDS TO LOSE SOME WEIGHT DESPERATELY

+ 7
13 years ago I feel it is time that some of our Bollywood actors like Salman, SRK and Aamir pull up thier socks and resolve any issues as these actors represent bollywood internationally.

+ 2
13 years ago i like him as a person, but i think he can some fights too far
it was rude for him to say something like that srk!!