Check out Salman Khan's blog http://duskadum.blogspot.com/2008/05/i-still-remember-day-when-my-brother.html as he writes, talk about his experience so far with the show and day to day happenings... 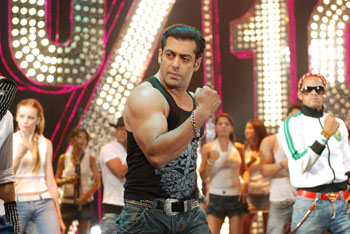 Featured Video
I still remember the day when my brother Sohail Khan, who always dreams big, thinks different, brought the proposal to anchor a show for Sony Entertainment Television. I had my reservations. The idea sounded so impractical that I rejected it even without giving it much thought. All my decisions are based on my instinct and some people think that I am too moody and cynical. But believe me I have been guided by my instincts and my heart all my life! I do not depend too much on intelligence, analysis and calculations… I believe in poet Adam who has said: " Aakal har kaam ko zulum bana deti hai…". Some meaning is lost in the translation-- that intelligence begets torture and torment and man is lost in deep thought and often feels ashamed of things that have never happened!

However, Sohail, the eternal optimist, and family friend Ajay Chhabaria have tremendous patience and endless power of persuasion. They kept asking me to look into the format closely. Their patience and perseverance paid dividends…

My experience of playing guest contestant in a show had taught me that simple inability to answer questions may humiliate a person in presence of millions of viewers. All such shows have that inherent humiliation. As a matter of fact most students do not ask questions in classrooms is only because of the fear of being refuted by the teacher and the thought of being ridiculed & booed by fellow students.

Questioning has been a taboo and there's social stigma attached to it which is quite unnecessary. Ours is a very obedient society. We have created an atmosphere in which ignorance has become bliss. What attracted me to the format of 10 Ka Dum is that there is no false shame and sense of humiliation if your answer is wrong. Sample survey has determined the exact answers in form of percentage and nearest to the exact answer is the winner.

This game is simple. It is a game of guessing.

So here I am convinced & ready to go…The format attracted me…and how! Stay connected will be back tomorrow....

eshalodha 12 years ago Dabang dvd release was there, all were there audience arbaaz khan malaika and sonakshi but not salman. we were standing from 2hours just to see you andget the dvd signed by you. but your brother said that you were not well so you dint turn up and i was broken completely. i just hope to see you in other events...love you alot :)
and yes i have seen dabaang 4times and wanted 6 times but i still cant get enough of you.
wish to meet you soon &lt;3

poonam25781 12 years ago Gudevening salman......How r u swtheart....m poonam....
Salman m nt knowing tht wether i m on the right track to mak a contact wit u....i hav mailed u a lot of times but in vein....still to m tring hard to get through tis n mak a note tht i m nt goin to sit like tht......whenever i check my mail my heart starts runnig so fast in curiosity tht i would receive at least one mail frm u.......really desperate to get in contact wit u....please read my message n do reply soon.......god bless uuu....love u a lot.....

poonam25781 12 years ago hi salman .......hw r u sweetheart......m poonam frm daund....salman i dnt knw wether u read our messages which we leave for u on this blog site....you knw salman i have fallen in love with you wen i was in 3rd standard....u r my first love....but if you ask me about ur likes n dislikes i dnt knw nething.....cos loving u isnt based on knowing u n releated wit ur fame....its ur eyes which drove me closer to u n in love to you....belive me its ur eyes which express ur heart n ur kindness to all....always remain the same human being....
salman i want to ask u one thing......pleeeeeaaaaasssseee would u fulfill my one dream,my one wish,of meeting u in my lifetime that to my B"day tht is 25july.....i knw tht after reading this u might be laughing bt i m really serious....i wloud lik to share one thing wit u .....m married...my hubbies name is Roopesh....havin roopesh as my lifepartnesr is all i want ,but my life wld be a complete jst after meeting u...cos life is incomplete without meeting my first love....it would be the most precious gift for me from god....i knw u r quite busy bt no prob u can call me newhere in this world i will be there for u to meet u..i dont think this is impossible my love.....m waiting for your reply...love u....take care.....

anuradhateotia 12 years ago I liked reading ur blog and confessing ur true feelings about the show. I am inspired by ur brav heart attitude in personal life also. I was never a die hard fan of urs but their is definitely some thing good that compelled me to comment on ur blog. May be the zodiac sign we share and the turmoils in life. Anyways I wish u all the good things in life and may the humanity in u always be alive.
GOD BLESS U! SALMAN
Anu