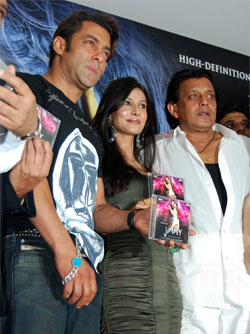 Featured Video
function of the same was organized at the D Ultimate, Mumbai on 31st March. Dashing actor Salman Khan was the Chief Guest on the occasion and released the music of the film, and the function rolled on in the absence of the star son Mimoh who is busy shooting for 'Loot' in Thailand. The Director of the film, Raj Sippy too was conspicuous by his absence, but Salman Khan made up for all by making the evening a grand and memorable one.

Mithunda who was present at the function graciously said, "So what if Mimoh is not here, Salman is here. He is like Mimoh to me". Recalling his struggling days in the tinsel town, Mithun said, "When I was struggling, it was Saleem Saab who supported me a lot and with his help I got my foot hold in the film industry. Salman came here on time and that too with just one phone call shows how much he loves me".

Speaking on the occasion, Salman said, "When I was in Russia for the shooting of "Lucky" wherever we went seeing Indian film crew, all the Russians used to sing only one song "Jimmy Jimmy Jimmy...aaja aaja aaja..." and I am sure Mimoh has all the potential to generate such craze".

Like father, like son, Mimoh too is an inborn dancer and it was very clearly visible in the promos of the film. On seeing the dance steps of Mimoh, Salman remarked to Mithun, "phaad dala. Yeh to toofan macha dega"-(SAMPURN)