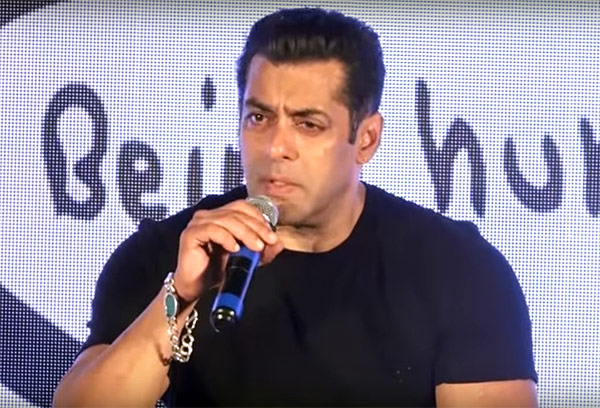 Salman Khan who is gearing up for his EID release Tubelight, recently showered his anger on the film critics. He says that he doesn't care about the ratings that the film critics give to any movie and especially for him, it makes no difference!

He was quoted as saying, "I genuinely, honestly don't care. I believe that they've no right to take anybody's hard work down. The fans will decide that, in any case. The box-office will prove it one way or the other. What have you done to earn the right to rip a film apart? On Day 1 of the release, you write some rubbish crap. It destroys films and a lot of hard work that went behind making it. With me, of course, it doesn't make any difference. And I think they know it all too well. My films are critic-proof. I am telling them now: go give my film minus 100 stars, why just zero. My fans will anyway watch my film and that's my reward." (sic)

When Salman was quizzed about his 'hit and run case', the visibly 'pissed' actor said, "For 20 years. 20 years is a long time, man. It's a lot of years. It takes a toll on you and your family. The financial toll on our family because of the cases, that have been huge. When I was a nobody I had nothing. When I become somebody, I got the magistrate court. When I become slightly bigger, I got the High Court, then. And now when I am in this position, I have the Supreme Court." (sic)

Well, tell us what do you think about Salman Khan's outburst! Leave your comments below.

ChurailMukhi 3 years ago Murderer cares about the toll on his family and his money, doesn't give a crap about his victims and their families.