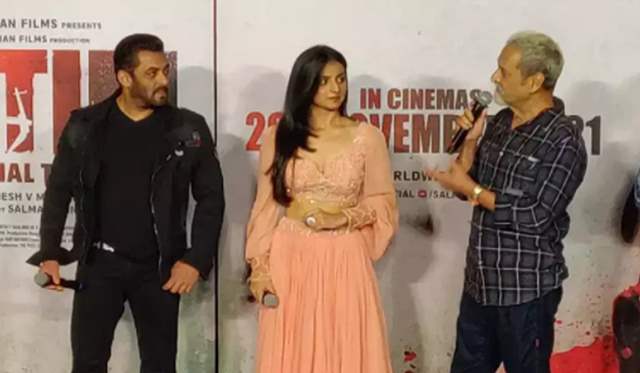 Today was a day about trailers we can say - and this feels more normal than ever indeed. Why so? Because we finally had those times coming back of big movie trailers coming with release coming up soon in November. Earlier we had the trailer of Bunty aur Babli 2 come and create a stir and now, another much-awaited film, Antim: The Final Truth had its trailer come out.

The films stars Salman Khan and Aayush Sharma in leading roles and will be seen coming at loggerheads  on-screen and was all things huge. But as know how director Mahesh Manjrekar was recently detected with cancer and the superstar himself Khan went on to talk about it during the trailer launch. He mentioned how Manjrekar was detected with cancer while shooting for the film and it was his passion for films that drive him to work even during these tough times.

Khan told ETimes TV, "He didn't tell us before. As soon as he finished a part of the shoot he got himself operated."

Talking about shooting for the film while battling cancer, Manjrekar said, " I have lost 35 kilos. It was during the shooting of the last portions of Antim that I was diagnosed with cancer. But today I am cancer free."

He added, "I was lucky that the chemotherapy didn't affect me. I was going through chemotherapy through the shoot. Later I underwent surgery. It is my passion towards work that drove me. When I got to know I have cancer, it didn't shock me. I know there are so many people who have cancer and they fight and survive."

In the end, Khan hoped that good times will be back for cinema halls. "There is no alternative to big screen. Did you feel the chairs moving with music? So you see, small phones can never be alternative to the cinema hall (experience)."