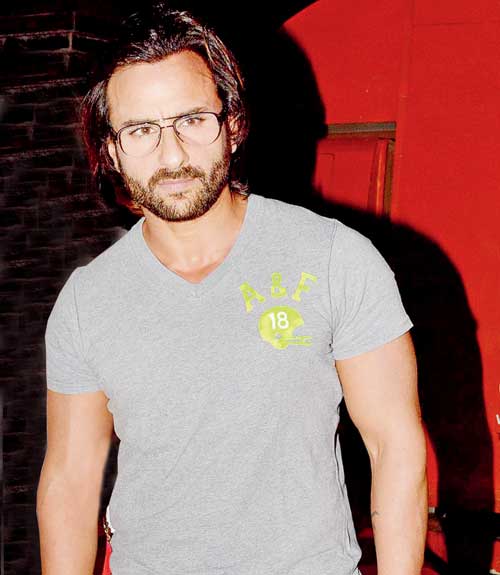 The actor is excited about the film and to reach out to his fans, he will be seen spreading a buzz about the movie in a dance reality show as well as a popular comedy show.

Confirming this, a source close to the team said: "Saif has gone to a dance reality show and also Kapil's comedy show for 'Bullett Raja' promotion. He generally stays away from these shows, but this time he is so thrilled about this film and working with Tigmanshu (Dhulia) sir that he has decided to make the most of it."

"This film is very close to his heart, and, in fact, he enjoyed himself thoroughly on these dance and comedy shows," the source added.

A gangster film based in Lucknow, 'Bullett Raja' stars Saif Ali Khan and Sonakshi Sinha and Jimmy Shergill in the lead roles. It hits theaters on Friday.

KStewartFanatic 9 years ago I luv both of Salman (1) n Hritik (2). both r so Dashing. I hope dere friendship dosnt affect by anything.

assbandit 9 years ago Stop being Kids, start acting like grown ups and same goes to Amitabh.

shravan95 9 years ago i like how hrithik tries to stay away from fights!

MeeraXD 9 years ago hritik is smart......why get into a tussle wen u are not involves in anyway...

Yuvika_15 9 years ago salman rocks... i didnt like the movie guzarish bt i thrt hrithik did a gd job....other than tht i didnt think much of the film!!
and y is media makin such a big deal abt sallu's comment.. many comments wer made against saawariya by farah khan no1 sed anythin thn..so y always pin point sallu!! as for hrithik its gd he apologised!!

ruexangel 9 years ago Oh please, Hrithik was good enough to apologise, i agree Sallu has his opinion and that's ok...but there is a way and manner of saying things, and his way was just not cool!

Laila2009 9 years ago The problem is people cannot handle criticism. SLB is clearly very arrogant and thought his work was a masterpiece. I have not seen it because I don't really care for his work. I loved Devdas but ONLY for the staging of the dances which were PERFECT. The Dola Re Dola is perhaps the most flawless and perfect dance I've seen. However, I could never sit through that film again. The film does not appeal to the masses; as I said the western version was not a commercial hit either.

Artful_Dodger 9 years ago wats the big deal about it? he dint like the movie.... well actually no1 did... but only sallu said it out loud... deal with it Mr.SLB...when u make a movie... ppl r gonna judge it... thats what sallu did...wats thr to b offended about it? SLB should read the audience's views mayb then he'll find sallu's comments better... LOL

exclusive
Exclusive Sara Khan to release her next song 'Bham Bhole'; says it's a ...
30 minutes ago