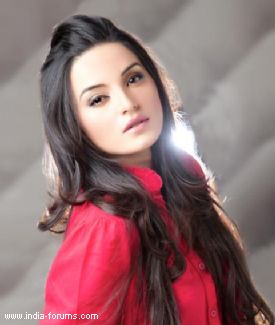 Sadia Khan is a talented Pakistani actress and model. She took the modeling world by storm and later became an actress. She has portrayed quite a few commendable characters and her role in 'Yaariyan' won her all the accolades.

Sadia Khan a.k.a Imaan of Pakistani serial 'Khuda Aur Mohabbat' ,talks about her life and career with Tellybuzz….

How are you placed professionally these days?
Currently, I'm working in a serial on GEO TV and also I'm working in a movie with Imran Abbas, titled "Abdullah". I'm also dabbling in music and should take out a video soon.

Tell us about your career graph and how hard was it to get into the industry?
Thankfully I didn't have to try that hard! I was lucky enough that whatever I did, people appreciated it. I started off by sending my portfolio to an agency and by god's grace I was flooded with calls and now I have no spare time. So, things worked out well!

You are a seasoned artist now. You have starred in many advertisements and serials. Where do you feel the most comfortable?
I feel most comfort modelling ,but then my love for acting is strong as well. There are a few roles that are very close to my heart!

Your current serial 'Khuda Aur Mohabbat' is a massive hit. How does it feel to be a part of such success story?
I'm so thankful to the fans who accepted me as 'Imaam' and of course the production team that considered me for the role. I have got immense recognition playing 'Imaam' and it feels surreal.

Tell us about your role as Imaan. Is it hard portraying Imaan?
Thankfully for me I can relate to the character – A girl who is shy, god fearing, respects family and has a hidden love for someone. It was very natural for me to play her. But, I must add I did find the dying sequence pretty hard to emote.

Your chemistry with Imran Abbas has been liked by all your fans, and now you are working on a movie together "Abdullah". How is your chemistry on and off the screen?
Well when I first met Imran I assumed he must be a snooty guy but thankfully he proved me wrong. He is kind,friendly and helpful now we are best friends. We had fun shooting ' Khuda Aur Mohabbat' and 'Abdullah'.

You are currently engaged. Is marriage on the cards?
Well I am happily engaged at the moment and enjoying it. Marriage will happen eventually,as they say here, Jab Allah Ki Marzi (when the god decides).

You are a known name in Pakistan. Would you be open to offers from India?
Yes, ofcourse! I'm working in television in Pakistan, so why not try serials in India. It is all about doing justice to your work irrespective of geographical location.

Any message for the fans?
All I want to say is that spread love and happiness. Respect your parents and try not to hurt anyone, because Allah lives in your heart.

DreamyButterfly 3 years ago Sadia Khan & Imran Abbas made a rocking pair in Khuda Aur Mohabbat! Their chemistry sparks and they became my top fav Pak jodi in only few months ^_^ This is such a great article! She's so down to earth and sweet.
I want to watch Abdullah... hope to find the movie online... I've been looking for this movie everywhere!
KAM 2 rocks! The show is simply epicness at its peak!

Ishq-Dua 6 years ago This girl is amazing
She has the looks and the talent. I loved Khuda aur Mohabbat even though it made me cry buckets of tears but this show is too good and hard to forget.
I want to see that movie Abdullah so bad. Her chemistry with Imran is awesome.

AemanKp 7 years ago Love her sooo much and khuda aur mohabbat too,waiting for kam season 2.

googleyes 7 years ago its realy very gdy gud serial.i cn watch it again n again although i cant see any serial for a second time.

OnepoundChic 7 years ago Before khuda or muhabbat now movie with imran ...they do make a cute couple nd this gal is very very pretty nd speaks so cute but honestly she cant act.. she cant act she cant act LOL nd why she wants to do indian serials they have no content to offer she'd be wasted ..
but anyways wishing her all the best !!

--HiNa-- 8 years ago wowww she is coming in ovie with imran wowww super happy cant express how uch happy am i :d

Najayamuhamed 8 years ago Hi sadia u r so beutiful and charming girl, U impress me N i become unconsciousness.

Aizaz 8 years ago She is gorgeous would love to see her new serial and movie.

..Adeena.. 8 years ago the first article for pakistani serials..
can't w8 to see her in movie..
she is very talented actress..

Rabz_14 8 years ago not a fan of her n havent watched KAM but im glad tht we'r getting articles of Paki celebrities :))