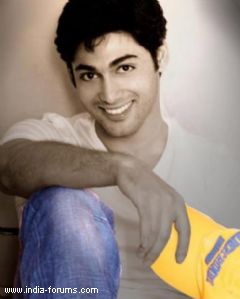 In the show, he is seen romantically inclined towards actress Sangeeta Ghosh's character, who is elder to him.

The actor, who made his Bollywood debut with a full fledged romantic film 'MP3 - Mera Pehla Pehla Pyaar', says romance has been an integral part of his projects.

"So far I have done romantic films only. Even the ads that I did had romance, so it's not a new thing for me. The only difference is that the actress (Sangeeta) with whom I am working now is older than me.

"But this difference is just for you visually. But as an actor, I am not bothered about it. Moreover, Sangeetaji is very beautiful, so I don't have to put in much efforts," Ruslaan said here on Sunday on the set of the show.

The show airs on Sony TV.

ShellJA 6 years ago a few years older does not make her an older woman.

krystal_99 6 years ago This show is awesome..Sangeeta n ruslaan r too gud an actor

.shinchan. 6 years ago awww he rocks

i love his voice d most