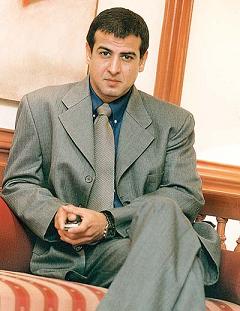 It seems the character of Rishabh Bajaj would be making a re entry, and television's one of the most popular actor and Ekta's blue eyed boy, Ronit Roy, would yet again be seen sharing space with his Saas Bhi Kabhi Bahu Thi co star, Hiten Tejwani, and Shweta Tiwari in the evergreen serial Kasauti Zindagi Ke. The creative team is now once more planning to play God and bring back the dead.

So is he really going to be back? ‘ There is nothing certain as of yet,’ informs Ronit. ’ They are contemplating the return of my character, and talks are on. But nothing has been finalized.’ the actor discloses hesitantly.

Just for the records, Ronit is perhaps the only leading man who has had two spectacularly successful pairings with two different leading ladies in two different shows on the same channel - Mihir-Tulsi in Kyunki and Rishabh Bajaj-Prerna in Kasauti.

However, with Prerna being 60 years old grandma now, and him being almost 20 years her senior as originally shown in the show, he might possibly be looking at playing an eighty year old! However, obviously reluctant to talk more on this, Ronit simply laughs and says,’ I don’t really know, so it’s a little premature to say anything.’

Or maybe the creative team will have amnesia about his age, and he will end up being just as old as Prerna…..if only the audience were blessed with this magnitude of amnesia, it would be so much more easier to swallow such atrociously ridiculous story lines! Or maybe they are, which explains why these serials get away with so many life size bloopers and go on and on forever.
Wish Ekta Kapoor could weild her magic and make the dead come back in real life too! That could probably make up for the element of surprise most of her serials so pathetically miss in.
Reporter: Minnie
Author: Minnie Gupta
Featured Video

+ 3
11 years ago RR rocked as Rishabh Bajaj in KZK, no one could have portrayed it better. Hope he does a role like this sometime soon, miss Bajaj and KZK too much.

+ 4
11 years ago would like to see ronit roy in same role as he played in kzk of bajaj , superb role , ithink that till date noone played such role like rishabh bajaj.....

dinesha 14 years ago Thanx 4 this article.
I like the charactor (Mr. Bajaj) which was acted by Ronit Roy.

14 years ago I hope he doesn't cm back coz i am liking the chemitry of shweta & Hiten!!

14 years ago Bajaj is the real deal!

It will be great to see the return of television's most successful and iconic male character of recent times.

+ 5
14 years ago lol... i wish he comes back...i was sure he would though, thts what always happenz, they kill him, then bring him back and then kill him again..history repeats, i just hpe its a little different from b4

+ 4
14 years ago I hope he does come back...the best thing inn KZK was Bajaaj ...an his nd Pernas awesome...out of this word chemistry...