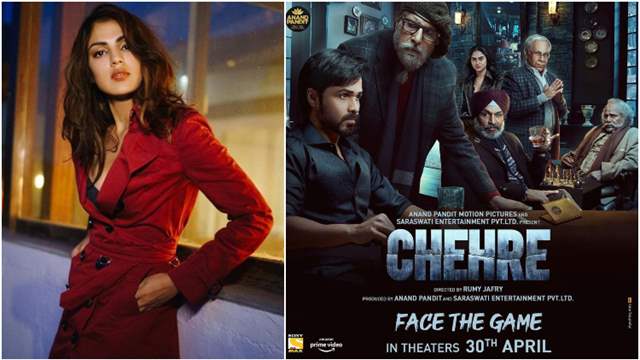 The team of Chehre recently shared the poster of their upcoming film and surprisingly it also saw the absence of actress Rhea Chakraborty who has been making it to the headlines for some time now. The Jalebi actress was arrested for her alleged involvement in the Sushant Singh Rajput, drugs case, and was released on bail after spending 28-days in prison.

The development in her upcoming film has left a mark upon her career as Rhea is nowhere to be seen in the poster which prominently features, Amitabh Bachchan, Emraan Hashmi, even Annu Kapoor and Bengali actor Dhritiman Chatterjee. The recent snub comes as a major setback for the actress as she quietly planned on making a comeback to the films this year.

A SpotboyE report quoted Rhea’s close friend who revealed that she had never in her wildest dreams anticipated this snub.

“Not even in her wildest dream had Rhea anticipated this snub. After all that she had gone through in 2020 she was somehow trying to piece together her life again…only to be rudely awakened to this. She is not welcome in Bollywood, it seems,” said the actresses close friend.

The report further pointed out how Rhea has taken this blow and questions the cropping of Rhea Chakraborty from the ‘Chehre’ poster.

Rhea’s friend further explained, “After what she went through, do you think this snub would shatter her? Not at all. She has fought many hurdles during the last year. She would fight this one too.”

Meanwhile, friends and well-wishers in the film industry are questioning if her role will be cut from Chehre or would she be spared at least that indignity.

The most surprising part of this snub is director Rumi Jaffrey’s silence in the matter. Rumi is known to be a close friend of Rhea and had supported her at a time when the entertainment industry kept mum.

Reveals a source, “Rumi Jaffrey had no say in the matter. He was not consulted about the date of release of Chehre. Or about Rhea going missing from the poster.”

Rhea still a part of Chehre; Her ‘role has not been chopped off’: ...

1 months ago She got what she deserved. This gold digger thought she would be able to live in peace after tormenting SSR, never!!!!! This is the power of million curses that have been directed at her. 1st by the victim’s family, 2nd by his followers, 3rd by the deceased themselves. This evil vixen will never gain an ounce of happiness, if she is actually a human then she would have the decency to just plain disappear and never show up onscreen but judging by her shameless nature I bet it’s too much to expect. And shame on everyone that’s actually sympathising with psychopath.

1 months ago Let her live her life. She is not found guilty. She might be, but no solid proof found yet. so don't make her sad.

1 months ago Johnny Depp got kicked out of a few movies because of his dispute with Amber Heard even though he is innocent. And Rhea is most likely guilty. She may not have directly killed SSR, but she definitely is responsible for not being there for him when he needed her despite being his girlfriend.

+ 4
1 months ago considering the size of Krystal's photo in the poster, I don't think it was a major role anyway. when Krystal posted this on FB, I had to find her in the poster like why she shared this image?

+ 6
1 months ago The truth will never be out....she could have been innocent. but i can't believe that at all. Anyways she is not an outstanding actor... mediocre one and a lot of people struggle. no sympathy.

+ 3
1 months ago Wrong on so many levels. I guess it won’t make economic sense when people continue to be against Rhea despite no proof against her. But really, it’s like the poor girl can’t catch a break from being snubbed and ridiculed, just for being Sushant’s girlfriend

+ 4
1 months ago with that logic, Salman shouldn't have a single release.

1 months ago This is so unfair towards her...