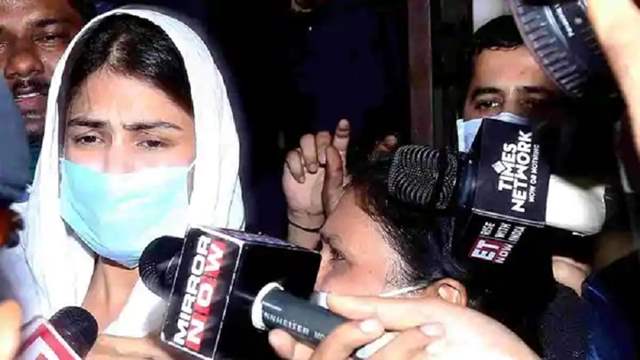 Sushant's Singh Rajput's sudden demise on June 14, 2020, shocked the whole nation. And after his family found loopholes in the investigations of Mumbai Police, they demanded for a CBI inquiry.

On August 19, 2020, the Supreme Court passed a verdict and handed over the case to the CBI.

Currently, the CBI is investigating the case and one of the prime accused in the case is SSR's girlfriend and actress Rhea Chakraborty, who is accused of abetting actor Sushant Singh Rajput's suicide.

Yesterday, she was called in for her first round of interrogation and at that time she admitted to her involvement in the 'drug chats' during the interrogation by the Central Bureau of Investigation (CBI), said sources.

According to sources, during her yesterday's interrogation, Rhea had admitted her involvement in the 'drug chats', but refuted the conclusions drawn from the chats, reports Times Now.

The Narcotics Control Bureau began probing the drug angle in the Sushant Sing Rajput's death after the Enforcement Directorate (ED) found some chats where Rhea was talking about Drugs and banned substance while going through her WhatsApp chats.

Apart from Rhea, NCB had filed a complaint against Gaurav Arya, Showik Chakraborty, Jaya Shah In the drug case. The NCB team is likely to summon Rhea Chakraborty to get details about her chats regarding drugs. The NCB received these chat details from ED when the probe agency had confiscated her mobile phone and took a digital dump of it.

Meanwhile, the Mumbai police have said that they will provide protection to Rhea Chakraborty whenever she commutes from her residence to DRDO guest house. "This is being done on the request of Central Bureau of Investigation," an official said.

The CBI is likely to grill the prime accused in the case, Rhea Chakraborty today for the second round of interrogation. The CBI had on Friday interrogated Rhea for more than ten hours.In the morning, Chakraborty, Rajput's girlfriend, reached the guest house where the CBI team is stationed at 10.40.

The actress was reportedly interrogated by a Superintendent of Police-rank officer of the Central agency on various aspects of the Sushant Singh Rajput case, the official had said.