View Profile
After the much awaiting days, Ratan Rajput has finally found her match in Delhi based Software Engineer with Adobe,Abhinav Sharma.

In a candid chat, the duo opened their heart about their journey in Swayamvar... 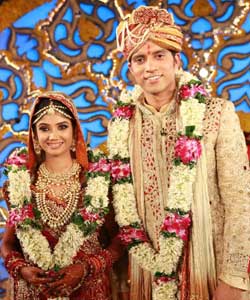 Abhinav, being a well settled guy with a respectable job, what was the reason that you took up Swayamvar in the first place?
Abhinav: Actually my mom likes Ratan and has seen her shows and even I liked her when she appeared on talk shows and stuffs. When there was a Swayamvar happening, it was a unique thing for me. So I wanted to know her better as well.

How did you feel when Ratan selected you?
Abhinav: I felt engaged

So how was the experience in the show altogether for you Ratan?
Ratan: I was a living in a different world where I was like a princess where I got whatever I wanted and these boys did tasks for me. It was a very special world for all of us where everything was easy and already set. But the underlying fact is that it is a reel world and we have to come back to the real world where we have to live together. Now that I am committed today, whatever I do matters him, and I want him to be there with me whenever I take a decision. Though the show is over, our life has just begun.

You have said that you would marry, so why only engagement?
Ratan: Actually I had said that I cannot assure you, I believe that whatever happens; happens for good and it is the almighty that creates the pair. If the two are compatible with each other and can stay together forever, it is well and good. But if you take the case of Rakhi, I would say that it was good that they are separated because it is always better to part ways than to have a tussle throughout life. It's better off like that than giving a reason to be on headlines of newspapers.

What is it about you both that you guys got attracted to each other?
Ratan: I had a picture of an intelligent, caring and supportive guy who is most importantly independent. And he resembled the picture that I had created where height is an added advantage. He knows how to handle the situation whenever we fight also.
Abhinav: She is chulbuli and she speaks her heart and she is intelligent as well.

How much time did you spend together?
Ratan: On screen we had met only six times. But at the same time we used to have our food together with all the contestants after which we used to take a walk. If they wanted to speak to me personally then we used to talk as well. If we count the times we have met off screen also, it would have just been some hours.

Since you have spent only little time with each other, are you now thinking about your decision?
Ratan: Not at all, because we are comfortable with each other. But at the same time you have to understand that we cannot be so compatible with each other so much as the love factor has not yet begun. Like for instance, yesterday a photographer had asked him to put his hands around my shoulders. But then, that is not possible so easily that we get so close to each other. Then there was a question whether he will be shifting to Mumbai. See I want to make it clear that we are not going to have a live in relationship.

What would you say about your decision?
Ratan: This is the first time that I have taken a decision by going against my horoscope. He is a Manglik, but till date there hasn't been anything that affected me badly because of him. I am safe and sound and healthy as always.

Since you have gone against the horoscope, is your family tense?
Ratan:Yes they are actually and they had even asked me whether I have taken the decision after thinking well. I know they are worried and it was obvious yesterday. After all, their child is going to make her important decision of life. Actually they all are really very simple people and they are not so camera friendly so that they can say something. My mom could just say that all three are good boys. But I know that deep inside their heart they are still tensed and worried about my future.

Is it because of the reason that he is a Manglik that you both are delaying the marriage?
Ratan: No, that's not the reason. Actually he is really nice and I wanted to give myself a chance to prove myself. And after marriage we would not like to stay in two different cities.

And Abhinav were you really confident enough to come and marry Ratan?
Abhinav: No, not at all. I was sure that I cannot just come and marry her after a few interactions. And I am really apprehensive about the television industry as well. So that is also another reason because of which I have to know her well.

Reality shows have always been a platform to get into the industry. Was that option there in your mind?
Abhinav: Actually television was indeed a fascination for me. But after coming here and seeing her life I realized that its better that she only continues the work as my work is even easier as it is intellectually stimulating.

So wasn't it for publicity?
Abhinav: See when it is happening on a national television, it is obvious that you gain publicity. So if I deny that fact, then I am lying.
Ratan: But there is a difference in intentional publicity like how Shoaib had done. But you have never seen Abhinav or me doing that kind of acts. That's why we are sitting together here right now. His intentions were clear. But the decision has been taken after a long thought process.

Abhinav, have you been in relationship already?
Abhinav: No but at the same time I have had umpteen number of crushes during my teenage and I had told her as well. But being in a relation and having crushes are two different things.
Ratan: He said he had countless number of crushes.

Have you seen Ratan's shows?
Abhinav: No, I have not seen.
Ratan: I am going to give him DVDs.

There was also the rumour that you both knew long before the show had even started?
Ratan: Actually even I know that. Actually these rumours will always happen in this show and even in the coming Swayamwars as well. Before I started doing the show I had even heard that my boyfriend is also going to be a part of this show. I don't know when I was hooked and unhooked with Vikas Gupta. I had also heard that Vikas Gupta was also entering the show. I would like to say that just because we have a good chemistry on screen, doesn't mean that we have known each other earlier.
Abhinav: You can give the credit to me as well because I know how to talk well.

During the tarot card reading it was said that there was someone who was already hurt. Have you found out?
Ratan: Actually I have not seen the show till now and hence I cannot say what they have said on camera. But during interaction, none ever made me feel like they have had a problem.

So how was their reaction when you declared your choice?
Ratan: I know there will be a disappointment from their side. But I have received a positive reaction from them.

So will Abhinav be shifting to Mumbai after marriage?
Abhinav: I know that this industry cannot be shifted to Delhi so I will have to come here. I will definitely look for opportunities.

Are you expecting a heroic reception back in Delhi?
Abhinav: I do not want that to happen in my office premises because I like to keep the decorum as it is. But I am ready to receive it outside.

truerose 9 years ago I am willing to bet that the next candidate for imagine's swayamvar would be veena mallick..

riatagore 9 years ago If she was really talking about truth and all she could have married to him. Y all those were haldi , mehndi and sangeet ceremony. all wasted. she could have not done all those rituals. for them their is no value for this rituals. only money matters. I am sick of this swaymvar"s pls stop this nonsence reality drama. I dont know about Abhinav. he may suffer because of u. deepak and anupam are safe now.
After this swayamvar, i think ur fan list will decrease. I dont know whether u will get to do any soaps in future or not. only one thing u can do that is marry abhinav within six months then u gain ur prestige and fans back

sbvsb 9 years ago I had seen one episode of this crap, an episode where a loud and rude drag queen, Dolly, is yelling at everyone. This is really one of the lowest common denominator show,s I guess, for low IQ crowd crowd and old aunties who don't have too many other reasons to live. One word: $h!t

sweet_angel27 9 years ago I already knew she was going to pick him.

lucky_sarkar 9 years ago ratan you are as worse as rakhi.After geting 7 crores how are you feeling?I hope gud.You are as cheap as rakhi and you can do anything 4 money and for fame.After all you are a crorepati now.Rakhi is your guru and u are her chelaaa.Pls dont do anymore serials bcoz we hav seen your real face.You are a fake person in reality and you can do anything for money like rakhi, dont do drama like rakhi history is gonna get repeated like rakhi again.As usual you will put all the blame on abhinav and leave him.POOR ABHINAV. Try 2 learn sumthing from rahul mahajan.

rekhavy 9 years ago the guy seems to be good in his intensions but the girl does not seem good enough for him...Obviously history is gonna get repeated as she is following rakhi's footsteps...you are a complete fake package,ratan.its obvious you did all this for money.now that you have become a crorepati i wonder how long you will stay with this guy..though i know this couple wont last,i hope it does...

abhi786 9 years ago Ratan people are not so blind to see that this drama is just for money... Fake marriage for Money is the worst expect from you .. What's the difference in Rakhi and YOU.. Both reject later telling some excuses,..

Imagine worst Reality show " swayamvar ".. Try to bring some good shows rather than wasting money on these junk fake marriages...

sruthi510776 9 years ago ha ha. u cheat us ratan. there was not a swayamvar in raamayan. i think u dont know ramayan

Deepika Padukone likely to be Summoned by NCB for ...
2 minutes ago

Ashalata Wabgaokar passes away due to COVID-19
37 minutes ago

Zarina Wahab was Tested Positive for COVID-19; Actress ...
47 minutes ago