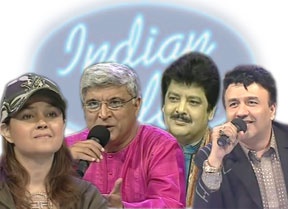 The judges and their questionable “out of control” hyper behavior in all the three shows is driving the public bananas. In Indian Idol, both Annu Malek and Alisha behave as if they are fighting some personal battle on the sets. On top of it, Annu Malek’s "I-Know-Best" attitude towards all other judges makes things look in real bad light at times. Alisha never criticizes while Udit Narayan seems to be too obsessed with the words “Kintu, Parantu”. It’s yet to be figured out from “Mr.Udit but Kintu Parantu’s” comments, that who according to him has the potential to become the Indian Idol as almost all the contestants have got this comment from him. Among the judges of this show, the one who never falls into any controversy and always gives the right comment for the contestants is Mr.Javed Akhtar. It could be better, if we get to hear some "sher" from him instead of Annu Malek. 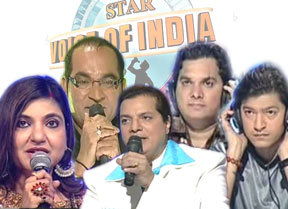 This very “I-Know-the-Best” attitude is actually shown by every judge in SVOI. And giving fewer points to the other group participants, so that his or her own group participant is safe, is another Eyesore. These attitudes are leading to some really bitter fights on the sets. Infact on Saturday, one celebrity guest Preeti Jhangiani wished that there would be less explosive fireworks. One very disappointing fact is the disparity in comments they all are following. Every other day they themselves are contradicting the comments they made in the previous episodes. How do the contestants then know which advice they need to follow if the advice provided to them changes with every episode? 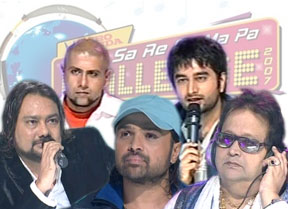 SRGMP judges are on the other hand are becoming experts in creating dramas. If from this round Trishanku format of elimination has been removed, then Himesh seems to have decided to keep the Trishanku_Love_Story alive in the contest. Ismail Durbar never has any extra advice for the contestants even though he may comment that there were some drawbacks in the performance. Unless these drawbacks are pointed out to them, how do they then rectify them? And what to say about Bappida – he just can’t get over the low notes errors he finds in every contestant. Vishal Shekhar, probably were the best till now, who always encouraged the contestants, irrespective of their gharana. But now, the hype for Mauli can be seen with this duo too. It was strange to see all the mentors pick one contestant name from their gharana and boast of him or her as champion of the gharana. Now what happened to the rest? Can’t they be seen? They were perhaps some of the better performers this week.

It’s high time we start rating the performances of the judge’s. And when we went on to give points to these judges; this is what the Point-Graph had to show:

14 years ago At the end of show when results were declared according to ranking Ismail darbar said to all contestants that 'yeh jo drama chal raha hai yeh sab mazaak hai seriously nahi lena chahiye aur aap bacche log seriously ghaane mei dhyan dhena aur mehnath zyadha karna' for which himesh immediately retorted looking at ID and said that 'jhoot math bolna yeh pyar ki triangle sachi hai'. I think there is something radically wrong with himesh. if he behaves like this with contestant before the screen god knows what more dramas he is creating behind the scenes and afterall these contestant has to depend on their mentor only for riyaaz. himesh please behave properly and maintain your dignity like shekhar and vishal and do your job [of only mentor] for which you have been given prestigious seat to do your job and nothing beyond that and please stop crossing your limit like this pyar ka naatak. parents are sending their children with a faith to your show to exhibit their talent and not for any drama baazi.

priyanee 14 years ago Hey ur analysis is so very apt, really the organisers have to be vry choosy nxt time...coz the judges r like drivivg the contestants n da public nuts!!

+ 2
14 years ago for ID even i would agree. it seems that Anu and Alisha are always fight personal battles but she tries to play safe. but i have to say her laugh is more of a fake laugh most of time. Udit ji maybe good but at times he repeats himself the same way most of the time. Javed sahab is the only sane judge there who makes sense and give good advices and that can be seen when the guest stars are there and give the same comments as him like Sonu did.
SRGMP is another story. Bapida is stuck with low notes and it seems he is supporting Mauli unnecessarily at times and asking the public to vote for her because she is popular and the same can be said about other judges who are supporting the same instead of her performances, which at times are not up to the standard compared with others. Himesh is another drama maker and ID is just a mere puppet who only there to promote his personality and his work and nothing more. and Vishal and shekar are the only sane judges there. so i hope the contestants take their points seriously.

14 years ago SRGMP ...totally agree with the ratings...VS are the best judges...
HR is really annoying with his stupid antics... bappi and ID ..no comments...

+ 3
14 years ago I am personally enjoying the talented singers of SVOI much more these days.. However, as far as the judges are concerned for SVOI.. let's not go there.. The little gimmicks of who they think deserve to win and all or the picking of bones b/w Agni and Prithvi teams is rather childish in my view.. However, the talent is rocking! Thanxxx for sharing your views Barnali ji :)

14 years ago Thank you for your honest candor and for saying exactly what so many of us are thinking. I don't want Indian Idol, however, I do watch SRGMP C2007 and always that the judges were much less self oriented than the ones in ASVOI but lately I feel that the SRGMP judges are going the same route and it really sucks. While VS were the only credible ones til now, like you said, this constant plugging of Mauli who can't sing all types of songs and just generally is no where near as good as they bill her to be, they have really disappointed me as well.

+ 2
14 years ago I agree with the comments of judges...some of them are becoming a real eye-sore....but still the singing for srgmp does enough for me and it rocks!

14 years ago hahah, even i like visha shekhar the best in srgmp. and indian idol i don't watch it. and voice of india i don't care about it.