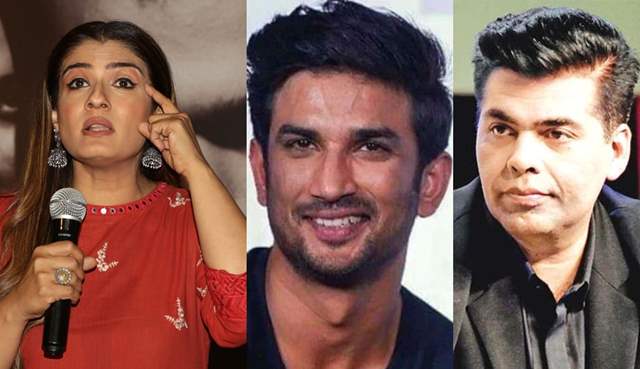 Sushant Singh Rajput's sudden demise shocked the whole nation and left behind a big question, 'When everything seemed perfect what went wrong?'. The actor took his own life by hanging himself from the ceiling of his residence in Bandra on June 14, 2020.

Soon after the news of his suicide came in, many Bollywood stars, his near and dear ones, his fans across the globe expressed their shock and grief over the 34-year-old actor's demise. Sushant's death has sparked a huge debate on nepotism in the Hindi film industry and since then started the infamous blame game as always.

On one hand, there are some people expressed their grief and heart-wrenching tributes on social media, and on the other there is a section of people who are constantly targeting some Big Bollywood figures and blaming them for instigating him to take his life.

Seeing so much going around on social media, Raveena Tandon spoke about the toxic star culture, favouritism in the film industry.

She thinks that this is 'becoming a witch-hunt, a lynch mob, which is wrong.' She was quoted saying by Hindustan Time, "People have to think rationally. It’s doing a great disservice to the poor boy who’s gone.”

She even shed some light on people of the film industry who plan one's failure, to which she was quoted, “There are politics, I agree. And there are good people and there are bad people. This is what I had written in my tweet also. And there are bad people who do plan your failure; I’ve been through it. They are the ones who would want to see you down and removed from films. It’s literally like classroom politics. They play dirty games,” she says adding that, “But people like this are there in every industry. We’re in a high profile glamorous job and the competition is cut-throat, so it gets highlighted.”

She even revealed to the portal that she was appalled to see a Whatsapp forward doing the rounds, “Karan Johar intentionally made a bad film for Sushant, so he could ruin the actor’s career. Why would a producer pay an actor crores of rupees, sign him in his movie and then risk the rest of the crores in making a shitty film? Why would anyone invest so much money, time and mechanism to intentionally sabotage his own film? How absurd are these allegations!"

Who knew that this young energetic fun loving young man , was hiding some intense sorrow deep down in his heart,hiding behind the dancing and the smiles . Wish he had reached out to some of his closest friends, Maybe ,just maybe we would’ve been seeing a different day.I met him only twice in this lifetime,did not know him well , but his sincerity, talent and kind heart was open for all to see. We will never know what led a successful,handsome young soul like him to take this step, but wherever he is I wish him Grace and at peace. #?? #omshantishantishanti

Raveena Tandon reacts to a Marriage proposal from Fan...