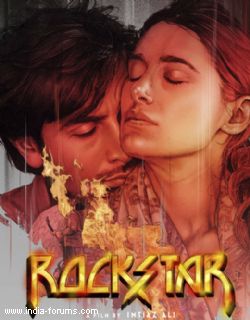 Mumbai, Sep 8 Bollywood's heartthrob Ranbir Kapoor is a charmer -- while shooting for a scene with sex workers for his forthcoming film 'Rockstar', he sang for them to ease their tension before the shot.

A scene in Ranbir's upcoming film 'Rockstar' shows him playing the guitar and singing for sex workers and director Imtiaz Ali wanted to shoot it in a real location rather than creating sets, so the director decided to shoot it in Grant Road here.

On the day of the shoot, the women were excited at the prospect of meeting Ranbir but were even more nervous about the shoot. To help them feel comfortable, both Ranbir and Imtiaz had a friendly talk with them.

'They (the sex workers) were very shy initially. They were reluctant about coming in front of the camera... but Imtiaz and Ranbir spent some time talking to them and created a comfortable environment after which we commenced shooting,' said a source.

The actor, who had taken extensive guitar lessons to prepare for his role, actually played it live and sang the verses himself, leaving them captivated.

'Once the shoot was over, some of them even took pictures with Ranbir and requested for autographs; and Ranbir happily obliged. They wished Ranbir and Imtiaz good luck for the film's success,' the source added.

The father-daughter duo of Anil Kapoor and Sonam Kapoor have been roped in as the brand ambassadors of EMGEE Group's real estate projects.

Anil said the brand's central philosophy of encompassing passion, integrity 'form the pillar of my family too and thus my daughter Sonam and I are delighted to partner in their progress.'

After being in the industry for over four decades, EMGEE Group is now expanding its luxury projects across Spain and Eastern Europe.

'We strive to offer unrivalled lifestyle living at exotic locations in India and Europe. Anil and Sonam Kapoor are a perfect fit as brand ambassadors as they epitomize family values,' said Mudhit Gupta, founder and CMD of EMGEE Group.

Sanjay Dutt and Ajay Devgn have turned item boys. Both the actors will be seen grooving to the beats of item song 'Shake It Saiyan' in their new comedy film 'Rascals'.

The song was first shot on Sanjay and Lisa Haydon. Director David Dhawan was so impressed with the way the song turned out that he decided to shoot a second version with Ajay, Sanjay and Lisa.

David informed ace choreographers Bosco-Ceaser and shot a second version of the song in just two days. The set was recreated with funky and colourful additions.

The film is co-produced by Sanjay Dutt and Rupali Aum Entertainment and is slated for Dussehra release. The cast also includes Arjun Rampal and Kangna Ranaut.