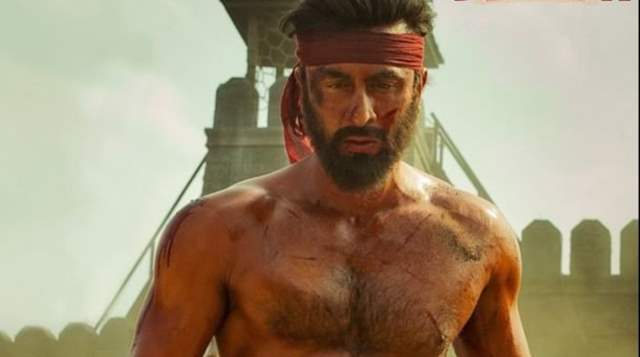 Ranbir Kapoor and Yash Raj Films have been promoting their movie Shamshera nonstop in the days leading up to its release. As seen in the trailer, Ranbir will portray a double role of the youthful Balli and his father, Shamshera in the movie, co-starring with Sanjay Dutt and Vaani Kapoor.

The actor has also put in a lot of effort in the gym to get a stunning physique for Shamshera, his larger-than-life avatar.

In fresh photographs posted by YRF on Monday, Ranbir, who is returning to the big screen four years after he gave audiences the hit film Sanju, showed off his ripped figure.

The Rockstar actor looked severely bruised yet full of courage. He is seen wearing a rugged blackish dhoti as he holds a massive pickaxe with a red coloured headband. Ranbir seemed fierce and bold as he prepared to face Sanjay Dutt in Shamshera, showing off his four-pack abs.

According to a report by Pinkvilla Ranbir’s trainer, Kunal Gir also dished out details about how Ranbir got his fab body in Shamshera.

"The target was to make RK look athletic, not too bulky as his character was like Robin Hood. We had to keep the rustic, raw appeal that came along with that character."

"Hence, he is athletic and strong looking. Ranbir had five meals a day. He was on a high protein and low carb diet and went through rigorous training five days a week! He had a cheat meal only once a week".

Directed by Karan Malhotra, Shamshera has been produced by Aditya Chopra and is set to release in Hindi, Tamil and Telugu on July 22, 2022.