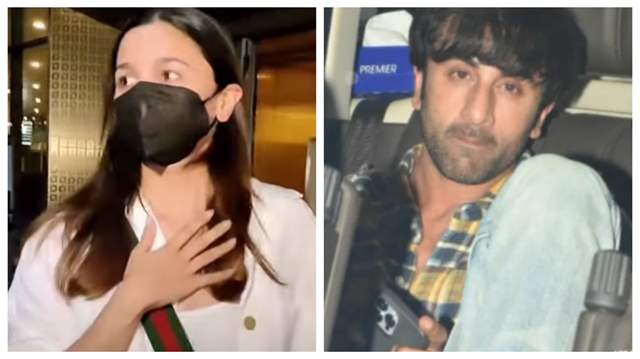 It is indeed all about power couple, Ranbir Kapoor and Alia Bhatt these days, isn't it?

On one hand, Bhatt was away from the country shooting for her debut Hollywood project for almost two months and on the other hand, husband and actor Ranbir Kapoor is currently packed and busy promoting his upcoming film, Shamshera.

Immediately after being married, both of them have barely been able to spend time with each other but did receive the biggest news possible that they are expecting their first child together.

We already reported how Bhatt wrapped up her shoot for Heart of Stone and was all set to return to India after all this time.

A while ago, it was the moment where Bhatt arrived at the airport and even the paparazzi were excited to see her.

As soon as she walked out, everyone couldn't stop congratulating her. However, the biggest suprise for her was the fact that husband Kapoor was sitting in the car waiting for her

Even though the paparazzi couldn't entirely catch Ranbir Kapoor's face but Bhatt was obviously elated to see him after all this time.

It is heartening to see indeed and finally, the married couple will be spending quality time together as they also plan Bhatt's pregnancy days ahead.

+ 8
2 months ago he let himself go as soon as they got married. sad.

+ 2
2 months ago I don't see happiness on his face for the past some years as if he is not able to do face saving or he pretends to keep a face like this in media.

2 months ago Ranbir was here in Mauritius some days back

+ 12
2 months ago This video was too melodramatic