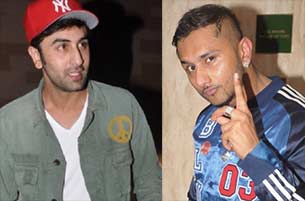 Actor Ranbir Kaoor, who will be seen in Bhushan Kumar's next "Roy", may collaborate with rapper Yo Yo Honey Singh for a special song for the film.

"I share a very close relationship with Honey Singh. He also recently did a song for us for 'Bhoothnath Returns'. We are contemplating with the idea of having Honey Sigh and Ranbir Kapoor for a song but nothing is finalised so far," Kumar told IANS.

"At the moment I am not in a position to reveal anything as its too early," he added.

The T-series head honcho, however, says that "Roy" will go on floors by April.

"Ranbir is playing 'Roy' in the film and we will start shooting by April 1. The film will be widely shot in South Africa and Mumbai," he said.

Rhea Sharma to be seen in Ekta Kapoor's next?
an hour ago