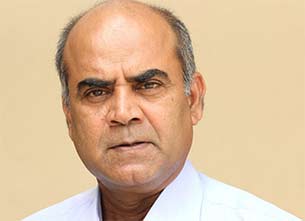 Popular Tamil actor Thalaivasal Vijay, who essays an important role in upcoming Tamil biopic "Ramanujan", says working in the movie was truly a blessing and he believes it is an important film in Indian cinema.

"When the director narrated the script and the importance of my character, I immediately grabbed it because I thought it was a blessing to be working in a film which will definitely be one of the important films in Indian cinema," Vijay said in a statement.

He plays the character of Satyapriya Rayar in the biopic, which is about the mathematics wizard Srinivasa Ramanujan.

Playing the role made him realize that "there is only a very thin line which separates a genius from the eccentric".

Although Vijay was only required to shoot for two days for his role, he says he thoroughly enjoyed his short time on the sets.

"It will be one of those shoots which I can never forget in times to come. Without hesitating I would like to say that I had the opportunity to live the way I wanted to for two days in Kumbakonam," he added.

Vijay says working with the production house was like a celebration in a family.

"Camphor Cinema is nothing but an extension of family - courteous, kind, joyous and focussed. It feels it is like a close knit family working hard for a celebration," he said.

The film tracks the journey of the ace mathematician from Kumbakonam to Cambridge. It has been simultaneously shot in Tamil and English.