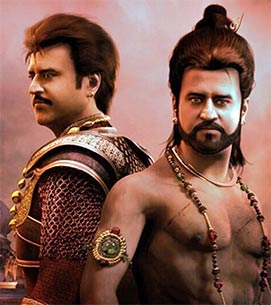 Ahead of the release of his much-talked about film "Kochadaiyaan", cinematic icon Rajinikanth Monday joined Twitter to make his presence felt in the digital world. He says he's looking forward to catch up on the "best Rajini one-liners".

He will engage with his fans via his handle @SuperStarRajini.

"I decided to start with Twitter because I felt that the platform is abuzz with all the news and the trends that happen across the globe and I'm told that this is where all the best Rajini one-liners are," the 63-year-old said in a statement.

One of India's most prolific and influential superstars, Rajinikanth's mass popularity and appeal is largely drawn from his mannerisms and stylised dialogue delivery. The usually reticent star is looking forward to interacting with his fans on the platform.

"I've always believed that my career graph is a miracle I owe my fans. I have been contemplating joining the social media platform for a while to connect with them, hear what they have to say and share my thoughts. Unfortunately, I never got around to it until now," he said.

Thalaivar, as he is lovingly called, has partnered with CA Media Digital's first venture, Fluence - a celebrity digital network, which will manage his digital presence.

"I am confident that I have the best team and the best guides who will help me connect with my audience," said the superstar.

Twitter's India Market director Rishi Jaitly said: "We welcome Rajinikanth to Twitter, are happy to support his launch on the platform, and look forward to watching him use our mobile service to engage in live, public conversations with fans and other icons around the world."

To make Rajinikanth's debut on Twitter more exciting, fans from all over the world, who follow him on @SuperStarRajini in the first week, will receive a 'WelcomeGraph', a personalised welcome picture from the icon.

His new film "Kochadaiyaan", directed by his younger daughter Soundarya R. Ashwin, is releasing Friday. Touted as the country's first 'photo-realistic performance capture' movie, the movie has generated interest with its new format.