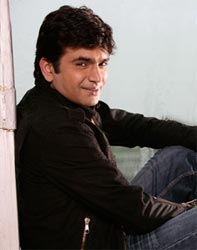 Viewers will soon be facing the moment of truth when their favorite celebrities face a set of 21 personal and embarrassing questions to win cash prizes on Star Plus' one-of-a-kind reality show, Sach Ka Saamna, produced by Synergy Communications. The show will be hosted by the versatile Rajeev Khandelwal.

According to our source, "Of the celebrities who were initially approached, many backed out as they were not comfortable with the format of the show wherein you need to speak only the truth, no matter what the question is".

However, the buzz is that Raja Choudhury, the infamous ex-husband of Shweta Tiwari who has been caught in one controversy or that other in the recent past has been finalized for the show.

According to our source, "Raja will be taking part in the show and is one of the finalized names".

We called up Raja, who said, "Talks are on, but nothing is finalized yet".

Well, we now look forward to the Moment of Truth when Raja faces the set of bouncers coming at him!!

13 years ago okay first of all who is he except Shweta's husband...everybody knows him as Shweta's ex husband....his relationship with her brought him into the industry ...and he's used her so much to aquire popularity it's kinda funny he'll always be known as Shweta's ex husband and have no identity of his own unless he does something worthwhile

13 years ago Not for Raja butatleast i am happy for Rajeev beacause he's coming back.

member1234 13 years ago Whatever is the story between Raja and Sweta...whoever is at fault,there is no way i am going to support RAJA. Sweta has always maintained the integrety and haven't bad mouthed or used this situation to get sympathy or get more popularity unlike Raja.Did anyone ever hear about Raja bfore that dance show with Sweta....
Sweta Rocks!!!!!

BTW this is about Rajeev and I love him and I am happy that He is back.....Good Luck

Rajeev,Please Ask him if he ever loved sweta and if he used his divorce as a opportunity to get popularity.

13 years ago good luck to you raja. As our Indian society has always been partial when matter came of women against men. We have always took Women's side no matter how much other side is not at fault, not once we try to think otherwise or even give a benefit of doubt, we always draw conclusion, it must be guys' fault. We all heard from Sweta about her side of the story, did anyone ever care or bother to know Raja's side of the story. No we are close minded, and we will not understand.

13 years ago Im not a big fan of Raja at all....but ill watch it for Rajeev

I am glad Shweta left him!!!

raanya 13 years ago i jst hate raaja....his all the evils would b caught there on the showw...
eagerly waitng 4 d show
plz also call ekta kapoor on this showw

+ 5
13 years ago I will watch it for Rajeev Khandelwal lol...
and do ask Raja, That was he jealous of Shweta all along !