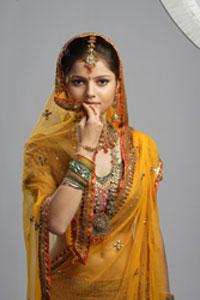 Radhika aka Rubina Dilaik is going through a traumatic situation after suffering burns on the day of her marriage in Zee TV and DJ's Creative Unit's Chhoti Bahu. It's the kind of situation where one would want to question God with endless number of why questions. Apparently, Radhika gets to do just that as she has an encounter with the divine deity himself!

Says Rubina Dilaik aka Radhika, "Radhika is now severely injured with 60% of her body burnt due to the accident that happens during her marriage. She is going through a lot of pain and suffering right now. Right from her childhood she has shared each and everything about her life with Kanha. So now that this happens obviously she talks it out with him, but what makes this time special is that Lord Krishna presents himself to her!"

So what exactly was conversed during the encounter? "I can't reveal much but just this much that Lord Krishna tells Radhika that even though he is omnipotent he cannot come to physically help me. So he has sent Dev (Avinash Sachdev) to help me. Dev is an earthly incarnation of Kanha himself! So now Radhika looks up to Dev as her life partner, love and lord," says Rubina.

The episode featuring the encounter between Radhika and Kanha will be aired sometime later this week.

+ 2
11 years ago we missing u very very much avina and ur kanha.cum soooooooooon .can't wait until jan also

12 years ago hpe u show the same bravery throughout! dont let anyone or anything stop u from the truth

12 years ago vishaka is the worst. get out of the show

12 years ago all the best for the current
track

+ 2
12 years ago Please Kanha save our
Radhika and Dev from all evils.

+ 2
12 years ago Hey Rubina, I really miss your talks with Kanha.