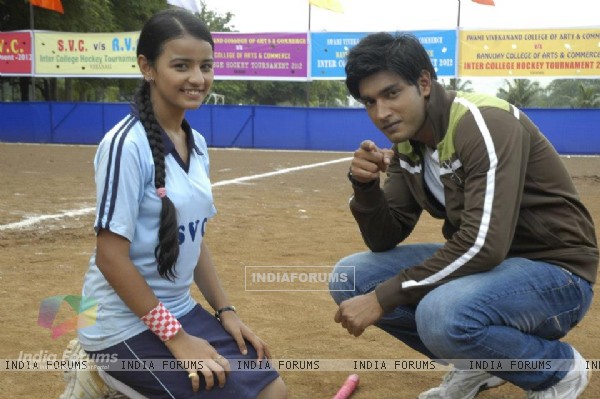 Shakuntalam Telefilm's popular show Sapne Suhane Ladakpan Ke on Zee TV is gearing up with a romantic sequence but it is between Rachna (Mahima Makhwana) and Rajeev (Zohaib Siddique).

The audiences have witnessed that Rachna and Kabir Tripathi (Piyush sachdev) have feelings for each other. In the previous episodes when Rajeev was training Rachna, Rachna develops feelings for Rajeev and confesses to Rajeev also but he refuses to accept her proposal.

Our sources informed us, "Rajeev will take Rachna to a club where he will give her surprise by dancing on a romantic number Baarish from the film Yaariyaan and in a very romantic way. She will be in a state of shock as he has already rejected her and now she is in love with KT. Rajeev is back in her life. Rachna will reject his proposal as she respects him a lot because he is her tutor but doesn't have any sort of feelings for him."

How will Rajeev react? Will he accept the rejection? To know more keep reading the space.

Kikidramagirl 6 years ago All I want is to see them dance on Baarish and then it's bye bye for me again! Mahima Makwana and Zohaib Siddique rocks!

A HUGE FAN 6 years ago KT & Rachna are too cute. Hope they stay together!

AnjaliPunia 6 years ago i agree with kjiki atleast see a dance peacefully grlz..rest is as sme say ghor kalyug...so no hopez fr rachna character stry .wen dey said rajeev will be shady n nw he is almst cupid i wnder were dey referring to his dark skin color which mst of us fall flat fr..

-Eris- 6 years ago What a waste . Why did they get zohaib back. All they know is to waste tracks . Load of crap
Ruined rajeev by making him chuddi buddy with rachna . KT s just a love sick puppy. Only constants -- me the idiot who still feels they ll have a proper track one day or teary eyed rachna

Good Luck Rabir;i will watch the performance and thn ll mute the channel.RAJNA have unbeatable chemistry for sure.Rajeev love you.Zohaib should get better role & shows as he has potential and look!

Colt.Pixy 6 years ago @raji, ghor kalyug started from they started to cheat rachna fans and turned all rachna track to gunjan tracks. now they made kt spineless just to ruin rabir story and give screen space to fatso pumpkin and cut all rabir story using just short cuts. so am taking U turn to rajna as I hate this kt who is dreaming and dreaming from 2 months. and I have quit this show already long before since they started maha sangam crap to glorify actress who gets screen space by hook or crook

@goldie
have you read article properly -_- ???? can't you see rajiv is going to propose rachna this time, not rachna?
when did she propose rajiv after falling for kt ??? **rolling my eyes**

ven 6 years ago I hope Rajeev will not turn negative...I still want him in the show..we miss him so much when he left.

However, I am loving Rachna and KT together!