View Profile
Ace Comedian and top anchor Suresh Menon who is one of the leads in Rakesh Roshan's Krazzy 4, directed 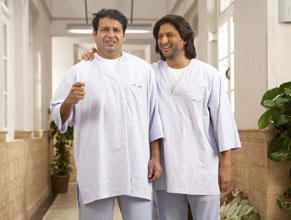 Featured Video
by Jaideep Sen made sure the sets of the film were one huge laughathon!!

Starring Arshad Warsi, Irrfan Khan, Rajpal Yadav, And Juhi Chawla along with Suresh Menon, the film's cast and crew were always in splits thanks to Suresh's never ending comedy!! In fact they used to just wait for his arrival just to have a great time laughing and so much so that it was difficult to shoot scenes seriously thanks to his jokes!

Says Arshad Warsi, "Suresh is one guy who has one of the most fantastic sense of humour…in fact we used to wait till he arrived because he would crack us up so much…it was very difficult to laughing and shoot! We all had a blast thanks to this one man!!"

Well, we wonder how the shoot got over…. what say Director Jaideep Sen?