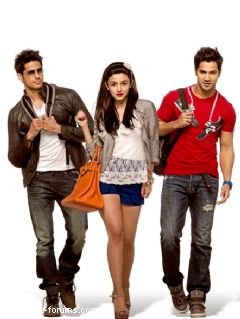 It has been nearly two years since the 'Student of the Year' trio graduated from the school of Dharma, and went on to explode the celluloid. And one only has to take a look at the ITunes music charts to realize their box office appeal. Presently, 'Teri Galiyan', the song featuring Sidharth Malhotra is the undisputed numero uno on ITunes music charts, even as 'SaturdaySaturday' and 'Samjhawan', from the Varun Dhawan- Alia Bhatt starrer 'Humpty Sharma Ki Dulhaniya' come second and third. In short, for the past 2 days, the nation has been grooving to great music from the ace 'Students' of Bollywood!

'Teri Galiyan', a song picturised in the scenic locales of Goa, on a brooding Sidharth Malhotra and his co-star for 'Ek Villain', ShradhaKapoor, is a romantic number that climbed the popularity charts with ease immediately after its release. Not surprisingly, it rules the top spot on the ITunes charts. The energetic, peppy 'Saturday Saturday' number, shot on a lavish set on Varun Dhawan and Alia Bhatt is already being called the 'Party Anthem of the Year'. It holds forth on the second spot on the ITunes charts. And the lilting 'Samjhawan' number from 'Humpty Sharma Ki Dulhaniya' again, comes third in this list.

With their songs ruling the imagination across India at this point, it is clear that, even at this early stage of their careers, the 'Student of the Year' trio brings loads of glamour and popularity to a film.