View Profile
Have you ever seen a boss like Arnav Singh Raizada who let his employee fall from his hands? Who shouts for each and everything?

The viewers did get a shock to see the charming and fun loving Barun Sobti in such a stone hearted character...

But after talking to Barun, TellyBuzz found out it was even more tough for him to play the role of Arnav...

Hear it from the horse's mouth... 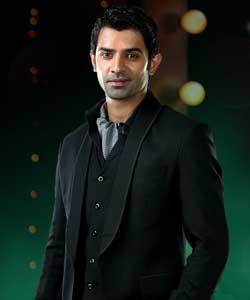 Finally you are back after a break; how do you feel?
I feel really good that I am back.

From a flamboyant Shravan to a straight faced Arnav Singh Raizada, is it tough?
It is very tough because it takes away a lot of your energy. Though I just have to make straight face and deliver my dialogues, I have to give a lot of retakes because the character is so serious and sometimes you tend to leave the character in the midway. It is really difficult for me to keep a straight face all the time as I am not so in real. At times I burst out laughing as well.

Was it difficult to come out of the aura of Shravan?
Seriously I did not have much to do when I was playing Shravan because the character was more or less like Barun. And the atmosphere is also very relaxed. But here the team is really perfect and all eyes are on you. Gul is really a perfectionist and the whole team is bang on the target and you really cannot deviate from that point.

How is it portraying the role of an angry young man?
At times it is difficult for me to convince myself that I am playing such a tough character because people might not believe you in that character. The guy has to be really tough and has to keep his arrogance in front of his Daadi as their ideas do not match.

Does Barun have any traits of Arnav?
I believe that we all are the same and everybody has all the traits where people lose temper and behave in a weird way. Frankly, people have seen only one side of Arnav and today he is tough because there is a reason behind it.  He has taken up the whole responsibility at a very young age and has seen a tough part of life.

You were not the first choice for the lead of the show, were you bothered about it?
Not at all, because Karan Singh Grover was even out of the picture when I stepped in and also I had actually started doing another show for another channel when Star Plus gave me the offer. But then I had to leave that and do this because I felt this more appealing than the other show.

How is it working with a channel like Star Plus?
I am having a fantastic experience working with Star Plus and they are precise of what they want. Gul is a Master of the  Game and Nissar is also great. It's a great team altogether.

From modeling to acting, how has the journey been till date?
I have never felt modeling was part of me because I am not that kind of a person who can be straight always and walk on the ramp all the time. Commercials are really cool as it gives the best creative ideas with 30secs of time and is shot in a short period of time. But it is a hard fact that each shot that you give has to be careful because a lot of money is invested in each and every aspect of it. Serials are equally good and it gives you time to learn a lot many things like the screenplay.

Khushi and Arnav gaze to kill each other; how are Sanaya and you off screen?
We can get along without killing each other. We are pretty sorted out and we get along really well without any tantrums or issues.

A memorable moment from the show?
The first shot that I gave was that of my entry wherein I am getting off from a chopper. I was so excited about giving the shot and had told myself that this scene would be the best, what happened next was unexpected. There was so much wind around me because the blades were still on and I had promised myself that I would keep open my eyes for the shot. But the strong wind and the two silver reflectors in front of me forced me to shut my eyes within a minute. I had to stand there for nearly six to seven hours for the different angles and shots.

Today there is a tendency for the television shows to go off air within a few months of its commencement; your comments.
That's not happening for us because the story is yet to unfold and it will take a long time to unfold the story.

Has life changed after wedding?
Yes of course, life is sorted after marriage. Since she is also working she understands my work also.

How do you manage home and work?
Actually I do not know how, but we are managing it well.

Any fan acquaintance that you remember?
Actually I am really very reluctant to go out in public. And once it so happened that my niece wanted to go to Essel World and I really did not want to go with her but she wouldn't go without me. And finally I accompanied her with the others. After I reached there I was feeling really awkward standing near to the luggage and people staring at me. Today I notice that when I did the role of Shravan, people would come to me easily and talk to me. But today they are a little apprehensive about talking to me.

Your show is already on air, what are your expectations?
I am hoping to get good scenes to bring out the best in me for the audience. I know there is no point in asking the audience to watch the show, unless there is something unique to be shown to them.  And I know that if we do good work people will definitely watch it.

Barun Sobti on being away from TV: My problem is the formatting of the ...

piyaarshi 5 years ago this what i appriciate in a celeb's iV...
straight and forward...
shows go off air in months reply was really intresting for me to read...
barun sobti is loved by me beacuse he was arnav in the show... :)

serendipity235 5 years ago You deserve to win your share of success Barun.

'Billions' Renewed For Season 6
4 minutes ago

Sneha Jain of 'Saath Nibhana Saathiya 2' Sacrifices Her ...
21 minutes ago