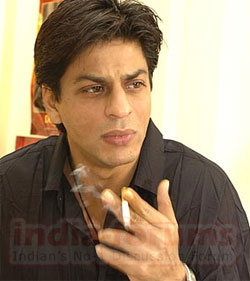 Featured Video
public. This violates the ’s anti-smoking law. Previous month, SRK was asked to justify his action for smoking at a cricket match in Mumbai and at a media conference in .

The anti-smoking group’s General Secretary Shekhar Salkar has raised his voice against him saying “This is not how a superstar should behave... Adored by millions (he) cannot lend a helping hand to promote smoking”. He also mentioned that the group would be filing a case against SRK at the local court. The group has termed his action to be “illegal, indecent and unethical” and has given the star 15 days to justify his actions.

Anyone breaking the law faces a fine of 200 rupees (4.50 dollars). The smoking controversy has come about when SRK is on cloud nine after Om Shanti Om was declared as a hit on the box office. Khan's lawyer said “A space where the general public does not have any access is excluded from the definition of a public place”. He defended his client by stating that SRK had smoked on both occasions in private places. The anti-tobacco group said it was "disheartened" by Khan's response and said legal proceedings would be launched.

The government banned smoking in public places and advertisements of tobacco products in 2004 as an action to curb frequent deaths. Atleast 2,200 people die daily from tobacco-related diseases in the nation of 1.1 billion.