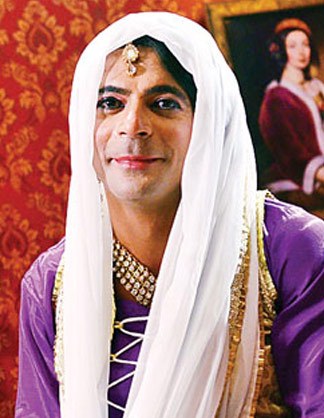 Comedian Sunil Grover, who rose to fame with his on-screen character 'Gutthi', never expected to become so famous. He will soon be seen in his own show 'Mad In India' as 'Chutki' and wishes that this too catches on fast.

"I want it to be as popular and that the audience should be able to connect with it. I never thought that Gutthi will become as big as it did," Sunil said in an interview.

Sunil's exit from 'Comedy Nights with Kapil' sparked off many rumors, however the actor did not want to 'dwell in the past'. He further added that the character was a hit due to many factors.

"Firstly the platform was very big, secondly the actor behind the character (was good). Thirdly, I come from a small place and have seen how people were around me and I shared those experiences," he said.

Sunil said that his new comedy show, which will be aired on Star Plus from February 16, will be a complete package.

"The show will have madness, happiness, smiles and a lot of fun. The audience will have a good time. I cannot reveal the format as of now, but we will be celebrating the madness in India," he said.

The show, which will be hosted by Manish Paul, will also include Dolly Ahluwalia and Siddharth Jadhav.

ap8412 6 years ago No body can beat kapil. People knew sunil as gutthi from cnwk show.
Till now. No one Knew sunil

But kapil as comedian . Everybody knows it.
Kapil and his show is on top and will be.

Sunil grover show will be flop . I am sure about it.

PRAGD 6 years ago After quitting CNWK not at all interested in you.

Good Luck for your new adventure!

Nobody can beat Kapil Sharma in comedy.

smallwonder 6 years ago I dont quite like such attitude of people discarding what brought them fortune and trying to do all yourself... It was a lovely team on cnwk... leaving it and starting it all over on your own just puts me off...

CatcherInTheRye 6 years ago i bet chutki cant beat gutthi..so js hoping the bst for u sunil grover..as comey nights is already a most loving show all ove rthe world n beating that wud b really a big deal...all the bst

-Maryam.K- 6 years ago All the best but NOTHING or NO-ONE can beat Kapil what so ever!! Anyways you were quiet annoying to in Comedy nights with Kapil -_-

Tish_Ani 6 years ago Whatever you'll do, Gud luck..
bt i miss u as gutthi n for me gutthi ws d best