View Profile
Chinmayee Sumeet returns to television after a brief hiatus with Colors and Playtime Creations' Laagi Tujhse Lagan. She plays the role of Baabi, a housemaid and mother of three.

Here, Chinmayee talks about how the timing couldn't have been better for her to return to small screen and more… 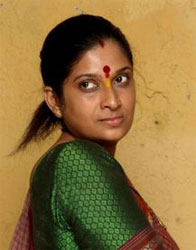 Featured Video
How does it feel to comeback after so long?
I will not call this a 'comeback' because I never went anywhere! I was always busy with acting. It's just that I've been working in theater.

What do you feel has changed within these years in television?
As a person from theater, I used to feel, once upon a time, that TV is synthetic and theater is more real. But now it has changed. Now we get to see something real and tangible on television too. Therefore, I decided that it won't be a bad thing to take up this offer.

What made you take up this role?
This is a strong character. Plus, nobody offered me something so interesting before, so can't really say that I had many choices.

Was it a conscious decision to stay away from television?
Yes, it was my conscious decision to stay away from television because as you know the schedule gets very hectic with TV soaps. I wanted to watch my children grow up. Now, my children are so grown up that they are too independent. Now they are like- What's this. Mamma is always at home. Ugh! (laughs). Apart from this, my son loves the fact that I'm an actor. When I'm in the green room and doing my make-up (for theater shows), he just looks at me in awe and questions why I'm not doing serials. So his encouragement plays a big hand for me to take up this show.

What was your first reaction towards your character?
When I went for the audition, the brief that was given to me, just took me over. It sort of kept pulling me towards this character. I felt an instant connection with the character of Baabi.

Didn't you have any reservations about playing mom?
I'm thirty – nine! Going by the current trend of television, they should have offered me a granny's role (laughs). So I'm happy I got to play a mother. It very well goes with my real-life age and experience.

Don't you miss getting decked-up for the camera as your character doesn't require it?
I'm so very happy that I'm not loaded with ornaments here. Even my mom told me that in this show at least the make-up is so minimal that she can make out that its indeed her daughter who's on the screen (laughs).

So now that you've started working for television, do you feel you're giving less time to family?
Well, what can I say? I have two families now (laughs). Sometimes I'm with one family and sometimes I'm with my other family.

Why did you choose to do such a stern character like Baabi and not go for comedy like your husband Sumeet Raghavan?
Umm…I guess there's a sort of division of labor. Onscreen my husband does comedy and I'm serious. At home I'm more jovial and my husband is the straight-faced guy.

What's your rapport with your onscreen kids?
Both my onscreen kids, Nakusha and Sethji(Jay Thakkar), are very possessive of me. They are always keen to be around me.

+ 2
12 years ago nice interview....never knew she is sumeet raghavan's wife..

Wasn't knowing this !!! Anyways thanks for the interview TB !!!

12 years ago She is awesome in the show...and funny too... simply talented just like her husband...

+ 3
14 years ago awww!..but its odd she didn't realise being swept away by currents..atleast she's finee!

14 years ago Wowww, she didnt realize?? Cant wait for the moviee.

14 years ago omggg she okay!!! yay!!! love her ever since bachna ae haseeno!!! cant wait for the movie