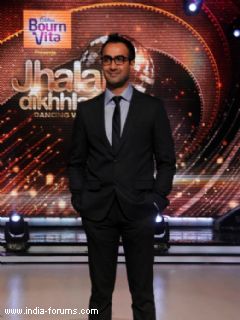 The talented actor Ranvir Shorey who was seen doing action and daredevil stunts in  Khatron Ke Khiladi Darr ka Blockbuster will showcase his hosting skills to the audience in the new season of Jhalak Dikhla Jaa.

Here is the actor speaking about his hosting expereince and more.

As Ranvir was seen in the daring stunt based show Khatron Ke Khiladi, he is all set to show his other side. He will be seen anchoring the new season of Jhalak Dikhlaa Jaa, which is a new genre. So when asked Ranvir about his experience he says, "Khatron Ke Khiladi was an amazing experience and I really loved the team of Colors. They offered me to do Jhalak Dikhla Jaa Season 7 but since I am not a great dancer so I refused to do. Later they offered me to host Jhalak Dikhlaa Jaa. I am really happy and like I said I love the team of Colors also so I agreed. It is a huge show and a very prestigious show as well."

While the viewers got to see Ranvir's funny side in Khatron Ke Khiladi who used to play around with the contestants to cheer up their mood and make the environment little funny but in this season Ranvir will be seen in altogether different avatar. So when asked him whether he would joke around or not he says, "Not necessary, because as a host my job is more to keep the show on track. So for playing around and joking we have maharatis like Karan Tacker, Drashti Dhami and Kiku Sharda. But if I cannot resist myself then I will keep giving my two-bits."

So will the audience also see Ranvir grooving and shaking his leg in Jhalak? He says, "No...No...No...Not really! No such plans! Unless it is an impromptu and passionate breaking into some kind of jig, no plan done!

When asked about his expectations from Jhalak Dhiklaa Jaa? Ranvir says, "My expectations are to be able to host the show well so that it breaks new grounds, reaches new heights! I am hosting a show almost after seven - eight years."

I m so proud to be ur fan...waiting fr JDJ

I knw u r a fighter n vl prove urself a good host..

6 years ago Karan Tacker u made us laugh always..gr8 sence of humour.. 6 years ago Wow Karan Tacker joking in Jhalak...
love u ...looking forward for ur comic side. 6 years ago GEET DRASHTI DHAMI you are my MISHTI...
Waiting for JDJ only only for you...
Love you always my jaan Drashti..
God bless you...

6 years ago GEET DRASHTI DHAMI all the best...
Waiting for JDJ only for you...
Love you DRASHTI...

+ 4
6 years ago All the best to Drashti and Ranvir. Excited to watch both anchor Jhalak this time

6 years ago GEET DRASHTI DHAMI all the BEST..
Waiting for JDJ only only for you...
Love you doll Drashti Dhami...