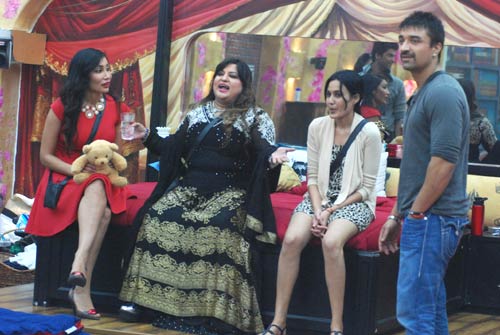 For yesterday's task in Bigg Boss Saath 7 on Colors where the house inmates were in for a treat in the form of their family or friends entering the house, one celeb who is nowhere connected to any of the housemates too was to enter the house. It was Dolly Bindra who has been a contestant in Bigg Boss Season 4 and after that she has made an appearance in almost all the seasons.
Her controversial demeanor and attention seeking manner makes her an interesting choice and this time too there were many who wanted to see her inside the house albeit temporarily. The channel also went all out to promote the entries and we saw many photos and videos where she had given interviews.
Even when she had spoken to TellyBuzz she had maintained that Elli Avram was the angel and there are many devils in the house and she could not take just one name. She also maintained that amongst males she would want to see Sangram Singh as the winner and amongst females she thought it would be Tanisha Mukherjee!
In the many videos where she has given interviews the outspoken Dolly Bindra goes on to reveal how she met each and every contestant and how she likes everyone for what they are. She says she found the house to be very attractive and just for masti sake she has picked up couple of things belonging to the inmates, one amongst that was the lip balm which Gauhar Khan had refused to share with Ajaz Khan. She also shares that she made one roti along with VJ Andy who was busy cooking in the kitchen and that she must have scared them since she told them that she was there to stay for long and would want to sleep only on the huge Captain's bed which looked comfortable. Sofia Hayat seems to be her favorite contestant who also tried lift the heavy weight Dolly and so did Sangram Singh. 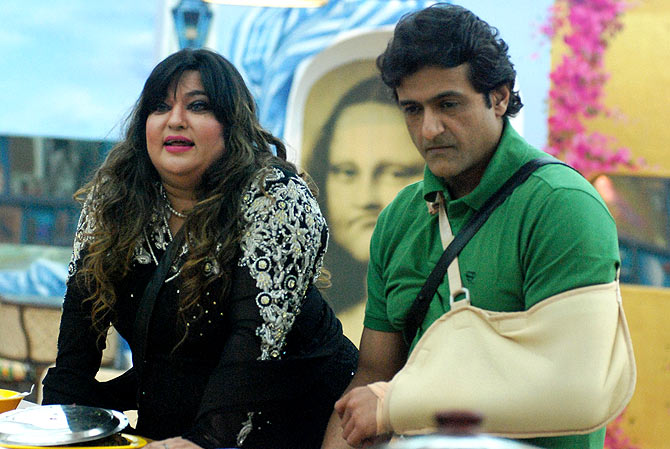 She also admits that she's not been a mere friend but a sister to Armaan Kohli and says that he is not playing a game. She also had a piece of advice for Kushal Tandon who she thinks has been made into a 'bali ka bakra'. She maintains that everyone was happy to meet her and had a special message for Ajaz Khan from his mom who send him lots of love. Dolly says that she missed meeting the dog Heaven who she finds the cutest and also that she would have loved to meet the angelic Elli.
Despite all this, Dolly who maintains that she loves Bigg Boss and thinks of the show as her family was not seen when the episode was telecast yesterday. A reliable source from the channel said that Dolly's bit was not telecast since there was not enough time to show her entry and the episode was running too long. However, this cannot be the reason for her non-appearance since she does garner a good response due to her loud behavior.
We tried to dig in more from our source from the sets and this is what he has to say, "You are right... just as she has said in the many interviews she did a lot of masti. However, unlike other contestants who were either immediate family or friend of the contestants, Dolly was just an ex-contestant for all of them so there was no emotional connect which is what the freeze task and the episode wanted to convey. The response that we have got for the episode has been great and many have felt that it was very heart warming and emotional. Maybe the creative team felt that Dolly Bindra's masti would not have gelled with the emotional quotient and thus it was not shown!"
However, finally when she was ready to speak Dolly Bindra had the last say, "Even I was surprised when I saw the episode and had to respond to people on Twitter. I wanted to know the reason for this since it was they themselves who had approached me and I had not gone to them. Now I have come to know from the creative team that since they wanted to focus on the emotional angle in the episode. My entry in the house might be shown over the weekend during the Weekend ka Wow episode with Salman Khan."
She says she had a good time inside the house and unlike the other entries she could meet everybody for a longer time, "I think I was inside the house for around 15-20 minutes during which time Bigg Boss gave the command of 'Pause' and 'Play' several times. I got to meet everyone and they all were so happy to see me that they went mad!" recalls Dolly Bindra as she tries to answer everyone about her non-appearance in the show.
From what she says, the weekend episode will be an entertaining one for sure!
Seema Khot Mattoo

+ 2
7 years ago Who wants to see this dramaa queen..go away loud speaker..seeing her itself gives me weird vibes..

7 years ago This is a crazy show ... Dolly is such an attention seeker!