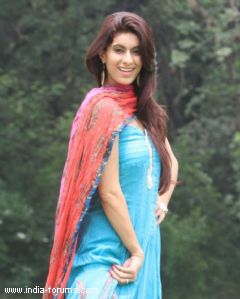 After showcasing her acting talent TV actress Khushboo is excited to act in films as she shares, "Last week my Punjabi film 'Bhaji in Problem' from the Akshay Kumar banner released and in few days another movie 'Yaari Non-Stop' with Mukul Dev is all set to hit the box office. Also I'm debuting with Barun Sobti in a Bollywood film called '22 Yards'."

Khushboo also clarifies about the controversy circulating about her being removed from Sony TV's Comedy Circus Ke Mahabali, "Well that's wrong news. The production house wanted to experiment celebs with comedians but things didn't work out. Also we were told well in advance that this would be for 12 episodes only and we had signed the contract accordingly. So it's wrong when people say that I was removed from the show," she explains.

Khushboo says that she will act in TV too if she gets some good offers and the show has an interesting storyline, "The medium doesn't matter these days. If I get a good script or a story for a TV show, I'll surely do it. At the end of the day, I know I'm content in whatever I do and that matters the most."

Apart from acting the actress is utilizing her time in singing as well, "Well yes, I have been focusing on my singing also and I have made my Bollywood debut as a singer with Akshay Kumar's film 'BOSS' for which I sung the Boss entry theme. There are more things lined up. By God's grace all good things are happening with me and I am really looking forward for my new ventures," she concludes.

We wish Khushboo all the very best for her future endeavors!

2 years ago BARUN SOBTI is an actor with a unique talent, a man with amazing eyes and a man with a pure heart. ,,,,

suzane88 5 years ago ...I think that the BarUn smart, talented and humble.
.on talent and for talent is no difference where to play.

. important ...the roles were good, and he professional

It does not matter ..

I do not be surprised if will see him in Hollywood movies ..
he's so good..bravo Barun..you are one and only..number one

6 years ago so eagerly Waiting for 22 yards...
want to see Barun Sobti as Ron...

6 years ago Wish and hope 22 yards is completed and we get to see Barun SObti and his powerful performance good luck...

Bahala 6 years ago All the best Barun Sobti..keep ruling hearts&lt;3

.HunnyBunny. 6 years ago love you lots Barun Sobti,you are the best

6 years ago Love you Barun!! Missing you lots