View Profile
Shahid Kapoor made his debut as a chocolate boy in Ishq Vishk. The actor has since then grown up and proved it in the phenomenal Kaminey where he portrayed twin brothers with their own set of quirkiness.

All set for the release of Badmaash Company, the actor takes time out to interact. He rubbishes rumours, talks of lessons learnt and what he loves to do in his free time. Somewhere behind the maturity we realize, like every human being, there's a fun loving child in Shahid.

Excerpts from our conversation… 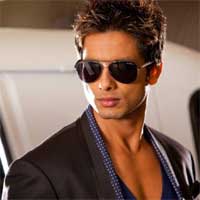 What is Badmaash Company all about?
It's a scam film, entertainer. It's about a bunch of youngsters who do wrong things the right way. It's also about their journey, their coming of age. You see this foursome suddenly start getting everything they want almost instantly. This has an impact on them. This is where the film has an emotional connect to the audience.

Tell us about your character.
I play Karan, he's a thinker. He knows he has nothing materialistic as he hails from a middle class family. But he also knows the worth of his brains. He is smart enough to know that the way he thinks or plans can change his life radically. His strength is that he believes in the power of mind.

What was your first reaction when you heard the script?
I loved the story! Any good film starts with a fresh idea and in Badmaash Company the scams and con jobs are so fresh…something that I've never seen or read before. But I agree I got scared of Parmeet later, for I realized that he's got a devilish mind that could plot such scams.

How did this eclectic group of newbies and an established you cope during the shoots?
We did a few workshops together. We all got together at Parmeet's place for the first workshop and that's where the ice broke. We're glad we had so many sessions just to get to know the script and each other well or else we wouldn't have looked like we belonged to one team. It was important for say Chang not to feel awkward just to come up and slap my shoulder in a friendly way. A slight awkwardness may bring down the whole beauty of the scene.  And as days progressed we all actually became good friends (smiles). All the outdoor shoots at New York, Philadelphia, and Bangkok helped.

What do you have to say about your alleged tiff over creative differences with Parmeet Sethi?
Me and Parmeet had a relationship where we can talk about everything. If I had any doubts about a shot I could go up to him and frankly have a word with him about it. I always feel if anything is required to be done, then I should voice it. Nothing more. It was never in a bad sense. And there was definitely never an argument between us!

How was it working with Anushka Sharma?
Anushka is uninhibited, confident. She does not come with her own set of pre- conceived notions which makes her very experimental and open. She is very talented!

Do the  link-ups make working together awkward for you two?
Irrespective of all the media reports, I go to the sets everyday with the same attitude.

What went wrong with Paathshaala?
Paathshaala has recovered its money. It was made for a cause and not for commercial purposes. I did film as a friend and to contribute to the subject.

Tell us about your spiritual beliefs.
I am spiritual. I have great faith in God. It shows us there's a larger purpose to life and gives a sense of acceptance to things you don't really understand.

What are your hobbies?
I love listening to loud music. That's my way of chilling out. Loud music and coffee! I love to go for bike rides, watching movies and yes, spending time with family. Nothing beats family time.

From your debutant days to now, what's changed?
I was a kid in 2003 and now I've grown as an actor. I've shed all my inhibitions. At first I used to act, why, because I loved acting. Now I'm more conscious of the quality of my work and what every character that I take up does to my progress as an actor.

What have you learnt so far?
Always look forward in this industry. Don't look back on your successes and keep gloating or look at your failures and keep mopping around. Both will affect your present in a bad way. Give your best to the current work at hand. Yes, it's definitely good to learn from your mistakes, find out what went wrong and improve. I do it within a closed room, and when I've figured it out, I come out and then don't talk about it.

Is there any film that you now wish you were a part of?
I wish I was a part of a film like 3 Idiots. I also liked Krrish and the Munnabhai series.