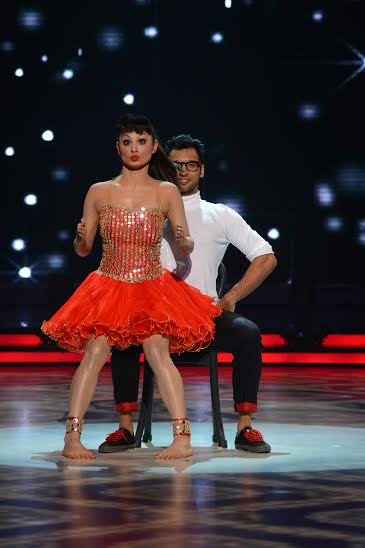 Mouni Roy has grabbed lot of eyeballs with her oomph acts in the Colors dance reality show, Jhalak Dikhhlaa Jaa Season 7. In the coming episode you'll be seeing a new side of the actress in the form of Baby Doll.
"It's a puppet act where I have played a doll. I've to say that it was very challenging for me as I had to be in a stiff pose and act like a doll which was difficult but at the same time, I really enjoyed it," says Mouni.
She elaborates, "I have definitely hurt my self. I'm going through a physiotherapy as my body was stiff. But it is rightly said that no pain no gain. I'm lucky to have a dance partner like Punit Pathak who makes you do everything. Such dance moves are not done in a daily life routine."
It was heard that Mouni met Satyajit Padhye (renowned puppet master) to understand her act in a better way. When asked her about the same she says, "He came here for a segment and it was very nice to meet him. I'm happy to meet such a person. After the final act, I was so happy and even the judges liked it. They were surprised that we chose Nagada sang dhol song from the film Ram Leela for a puppet dance."
So how much winning this contest matters to Mouni? "Look I believe in a journey but when you are in a competition, definitely the winning factor comes. Till now my journey had been good and it would be complete if I see myself in the finale. So I wish and request my fans to vote for me as it matters to me a lot," concludes the actress.
We wish the beautiful bong actress all the very best!

+ 3
6 years ago omg Mouni Roy and Punit Pathak your puppet act was brilliant.
love you guys :)

6 years ago All the best for jhalak. Hoping fr the best.
Love you :)

6 years ago Your hard work will definitely score you full marks!
Love you so so sooo much!
All the very best!

+ 3
6 years ago Love you Mouni...all the best for your Jhalak journey...hoping to see u in the finale :)

+ 3
6 years ago Mouni Roy and Punit Pathak..
you guys rock... will vote for you dher saara

+ 2
6 years ago Love you Mouni Roy keep rockss. U are our winner, our dancing diva, star.

+ 3
6 years ago Loveee you Monu..You are one STUNNER..BE it Looks ..or Dance or just being a sweet person that you are..god BLess..& YOU ARE DESTINED TO WIN JHALAK I ve told you..!! Muaahh..!!

6 years ago all the Best mouni Roy
hope you win

6 years ago All the best mouni ... Loving all your performances... Good luck