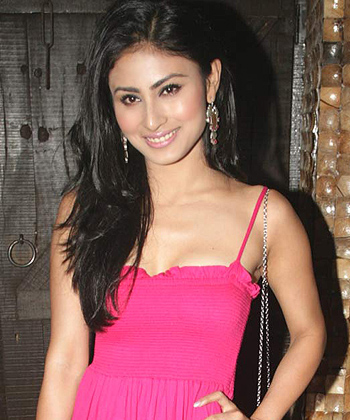 Gorgeous and charming Mouni Roy who is all set to shake her leg in the dance reality show Jhalak Dikhhlaa Jaa Season 7 on Colors, will be seen grooving on the stage along with her choreographer Punti Pathak who is an acclaimed choreographer. Mouni who was seen in Life OK's Devon Ke Dev. Mahadev will be seen in a totally different avatar. The actress will be seen in different genre shaking her leg in front of the esteemed judges.

Here is Mouni talking about her first day at Jhalak, choreograpgher Punit and contestnats in conversation with us...

As we already know that you are very good dancer so made you to participate in Jhalak Dikhla Jaa season 7?

First of all it is a myth, that I am a good dancer. I can do dance I won't deny that but all Indian forms. Right now I am finding this whole thing very difficult and hopefully Punit Pathak will help to get better with different forms of dance as well.

As you have already seen Punit Pathak dancing, so what was your reaction when you got to know that Punit is your partner?

I am a Punit and Lauren's fan when I saw them dancing in the last season. You will see my reaction when the first episode will go on air. I was jumping, I was thrilled when I saw Punit as my partner. Then I thought its just the beginning as there is a long way to go and I will try to give my best performance.

When we asked Punit who is Mouni's partner that how is he feeling that he got Mouni as his partner?

Udti udti khabar aayi thi that some actors are in talks for this season and I had heard her name also. That time only I thought and hoped that I get Mouni as my partner because firstly she is very beautiful (laughs), secondly few weeks back I had choreographed Mouni's act for Comedy Nights with Kapil, so we had interacted with each other and third I somehow get good vibes from her even without meeting her. Here it is very important to have a good partnership and good chemistry. When two beautiful people come together, the performance will be beautiful.

You all have shot your first episode, so how was your experience?

I want Punit to say that because for me it was so chaotic mujhe kuch samajh nai aa raha tha. I was not talking to anyone I was like completely speaking to myself that okay I have to do that rest everything else is about technicality. 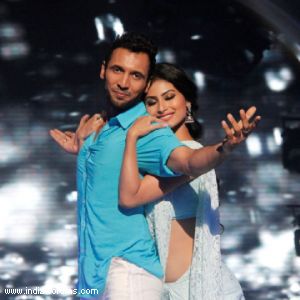 How difficult it is to choreograph Mouni?

In life whatever you do there are pros and cons, there is something nice and something bad. So here also with Mouni, there are few things which are easy for her, and there are few things which is little challenging for her. If I don't challenge her or push her then the level of our act will be little low. So we have to make sure that we push ourselves. It's not only about Mouni but I also have to push myself, mentally, conceptually and act wise also. So wahi koshish and we are trying also to keep growing after every performance.

When are you planning to come back on fiction shows Mouni?

I don't want to do anything. I have been getting calls but honestly I can't do anything when I am doing Jhalak. After Jhalak I will see, I will take my pick. I like doing things arramse as I am a lazy, easy going person and also I like doing one thing at a time. So let this get finish and then I will think over it.

Who is toughest contestant according to you?

All are very tough, because as we were talking about the contestants that talent between them this year is average or above average. Obviously with that they have a characterization, they have their X factor and plus points. Dancing wise everyone's capability is average or above so that way it is 19 -20 but baazi kon marta hai who har hafte pata chalega.

Punit you and Shakti were together in DID where she won, so don't you think so that she can be a tough contender as she herself  is a dancer?

Yes she is a very good dancer. She is a fabulous dancer and also a great performer and she won that reality show which proves that she was a good dancer. Having said that she has come in a different limelight here and it will be challenging for her also because we all know that she is a good dancer but she will have to increase her level as I have to make sure that I have to increase Mouni's level of dancing. So everyone will be challenging to each other.

Every year there is a strong contender and somehow they do not get the Jhalak Trophy. This year too we have a strong dancer this season. What is your take over it?

I would like to answer this question, a winning does not really matter more than that journey matters more and according to me anything people remember from last season is Lauren and Punit. There are many factors as you cannot pin point that because of this they win or they lose, there are voting, there are marks and everything is put together nothing is fortunate or unfortunate. The most important is dancing and whosoever has got the privilege to dance on this great platform should appreciate that and give your best.

We wish Mouni and Punit all the very best!

Hopeenlight 6 years ago All the best Mouni and Punit! Do your level best and challenge yourselves to the max!! God will take care of the rest! Love always!

J-chan 6 years ago why isn't shakti tagged in this article??

anu93 6 years ago Mouni u are a gifted dancer!
Love ya lotss

Avika.Gor 6 years ago Mouni Roy and Punit Pathak guuuys u rocked the stage. May God bless u with victory